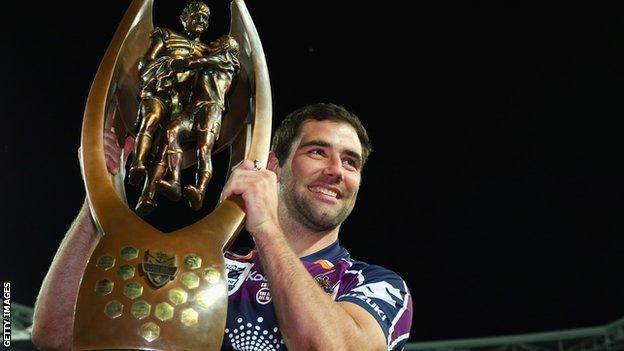 Melbourne Storm have included 11 members of their Grand Final-winning team in their squad for the World Club Challenge against Leeds on 22 February.

Kangaroo trio Cameron Smith, Billy Slater and Cooper Cronk will all be part of the 21-man squad after overcoming injury concerns.

Smith is fine to tour despite breaking his nose in Saturday's NRL All Stars clash in Brisbane.

Slater (ankle & shoulder) and Cronk (back) are also fit again.

Slater proved his fitness in the 40-8 trial defeat by Canberra on Friday but the Storm paid a heavy price for their loss with New Zealand internationals Matt Duffie (hamstring) and Kevin Proctor (knee), and utility back Maurice Blair (cheekbone) all suffering injuries that ruled them out of the trip.

Melbourne and Leeds have met twice in the World Club Challenge, in 2008 and 2010, with honours shared.

The Rhinos are the current world title holders after beating Manly in last year's match, while the Storm return to the UK for the first time since 2010 and will be looking to become the first NRL club to win three global challenge matches.

The squad arrive in London on Tuesday morning and will spend five days in the capital before travelling to Leeds next Sunday to complete their final preparations and will hold an opposed training session with Halifax on Tuesday week.