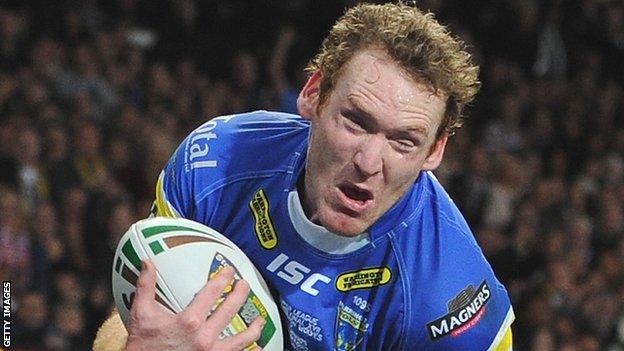 Catalan Dragons full-back Brent Webb was twice sinbinned at the Halliwell Jones as Warrington ended the visitors' winning start to the new season.

Catalans winger Damien Blanch ran in converted tries either side of the break to narrow the gap.

Warrington half-back Lee Briers missed the game with a neck and shoulder problem, while veteran prop Adrian Morley went off injured early on after tearing a biceps muscle.

The Dragons were without second-row Gregory Mounis, who had a finger injury, while Scott Dureau and Lopeni Paea are long-term absentees. And banned prop Julian Bousquet, who was beginning his four-game ban for a late tackle on Salford's Theo Fages last week.

But, having defended their player and announced their intention to appeal Bousquet's ban, the Dragons did not shirk challenges in a full-blooded encounter.

Webb's first yellow card was for holding down home winger Chris Riley, only for the visitors to make light of it by scoring their first try through Blanch just before the break.

Both sides ended the game with 12 men, Warrington also having a man sinbinned, England forward Ben Westwood, for throwing a punch at Webb in the mass dust-up that triggered Wire's penalty.

In a scrappy, controversial and ill-disciplined contest, Warrington coach Tony Smith described an incident placed on report by the referee, in which former Great Britain stand-off Leon Pryce appeared to knee one of his players, as "horrible".

"It was horribly messy and scrappy. It spoilt what could have been a good game. There was a lack of control and we got dragged into it. It was a bit like a dripping tap and sometimes you have got to turn it off.

"There were a couple of nasty incidents. But there is a difference between nasty stuff and tackles that go wrong.

"I am good mates with Brent Webb. I have coached him and have a lot of time for him as a player but he lost his rag there. "I didn't want Benny to get dragged back into it. But it's a shame we're talking about that. It was good tough footie game for a lot of parts.

"I thought we did a bit but still conceded too many points. We are still working our way into the competition. "We're going to get stronger and better as we go on."

"I don't say it was horrible, but messy. It was a physical, tough game between two big forward packs.

"One team wanted to be more aggressive than the other one, but both teams were aggressive.

"We need to be more disciplined with the ball, in defence and with the ref as well.

"We had a lack of discipline and concentration."