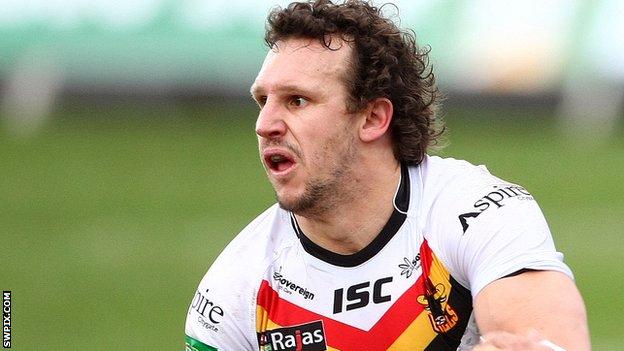 Brett Kearney ran in a hat-trick of tries as Bradford Bulls raced to victory against neighbours Castleford.

Adam Sidlow, Matty Blythe and Chev Walker also crossed for the Bulls, while Jamie Foster was successful with all seven attempts at goal.

Walker's try was the 99th of his career to cap a superb personal display.

Jamie Ellis and Kirk Dixon went over for the visitors, who matched Bradford for more than an hour and were unlucky to lose by such a wide margin.

Much of the damage was done in the final 10 minutes when Castleford had been reduced to 11 men.

The visitors had been dealt an early blow when they lost debutant Gareth O'Brien with less than four minutes played.

Replacing the suspended Rangi Chase, O'Brien was caught slightly late by Bradford prop Nick Scruton and it left the groggy on-loan Warrington man unable to rejoin the action until the closing stages.

Jarrod Sammut should have put the Bulls in front but, after racing onto his own kick, he failed to touch down the bouncing ball

But Kearney did get the hosts on the scoreboard shortly afterwards, in controversial circumstances.

Cas claimed that Justin Carney had been impeded as he attempted to collect a kick, but the try was awarded after the intervention of the video referee.

The Tigers were helped back into the game by Bradford's indiscipline.

The Bulls gave away three penalties in quick succession and Jamie Ellis, the hero of six days earlier, cruised in between the posts.

The home side had Danny Addy sent to the sin-bin by referee Steve Ganson as a result of the team's constant offending, but they made light of being a man down when Sidlow burst through a tackle to score his second try in Bradford colours.

Dixon gave the visitors the perfect start to the second period, racing onto Jordan Tansey's kick to level the scores, although Bradford could feel aggrieved as there was a strong suspicion of a forward pass earlier in the move.

But, in a frenetic spell, the Bulls wrestled the advantage back through a try from Blythe, who has scored in each of his three appearances for Bradford.

Heath L'Estrange began a slick move and Kearney produced a super offload to send centre Blythe over in the corner.

Foster, who had successfully converted all three Bradford tries, then stretched the lead to eight points with a penalty following a high tackle by Tigers skipper Michael Shenton.

Hooker Matt Diskin then had a try disallowed, but the Bulls were able to cruise to their second home win of the season when Castleford winger Carney and half-back Ellis were shown yellow cards.

Walker raced in to move within one try of a career century, before full-back Kearney took advantage of a tiring Cas defence to complete his hat-trick.

"We were a bit edgy when we get down there [near the line]. We're trying to score a try all the time when if we ask a few questions, we'll get there. We just need a little bit more direction at times.

"I liked some of the stuff - we were skilful and made a couple of good offloads but our structure just went away from us at times.

"Brett Kearney is a quality player. He catches the ball well and runs with it and defends everywhere."

"I'll have a look at everything but I was confused.

I'm not going to sit here and pinpoint the ones [decisions] I was concerned with.

"We showed some backbone and some spine. We continually repelled the opposition when we were pinned on our own line through repeat sets which is pleasing."