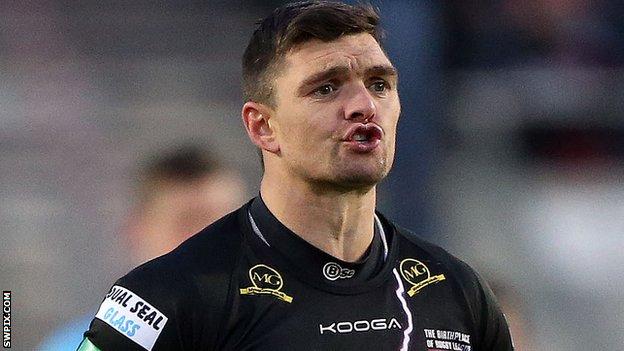 Huddersfield Giants maintained their 100% start to the Super League season, coming from 10-0 down to beat Wigan.

But tries either side of the interval from Jermaine McGillvary and Jamie Cording put the Giants in front.

Early on, Wigan had coped well with the absence of star man Tomkins, who was missing because of a shoulder injury sustained in the eight days previously.

Second-row Farrell has impressed for the Warriors in the opening weeks of the campaign and the 22-year-old was heavily involved in the visitors' first two tries, first beating two defenders to score himself and then providing the opportunity for Charnley to outpace the Giants defence and make it 10-0.

Huddersfield, who went into Saturday's match as the in 2013, had enjoyed an early spell of pressure without the reward of any points.

But it was not until the introduction of Eorl Crabtree from the bench midway through the first period that Paul Anderson's side were able to breach the Wigan backline.

Crabtree's powerful carry was the catalyst for a Huddersfield break, which ended with centre Leroy Cudjoe shifting the ball quickly for winger McGillvary to touch down in the corner for his second try of the season.

Shortly after the interval, the Giants went ahead when Shaun Lunt set up Cording to cross under the posts.

The influential Brough converted for a second time and later kicked two penalties to put the home side six points clear heading into the final few minutes.

And after seeing off a late Wigan surge, Ferres intercepted a wayward pass to run in from 70 metres and ensure Huddersfield would return to the top of the table at the expense of Warrington.

"Sam Tomkins is a great player but I don't want his absence to take away from the spectacle, whether we win, lose or draw.

"It was a great game and Sam being there would have only added to it. He wasn't so you've got to give credit to the 34 blokes who were out there.

"It was played tough by two very good teams. It was the sort of game we needed to make sure we actually believe in the things we are putting in place.

"It was a real arm wrestle. It wasn't pretty but who cares if you win it?"

"Sam Tomkins copped a knee from Adrian Morley [against Warrington] and thought he had broken his scapula but we've had him scanned and it's just really bad bruising. We'll assess him as we go along but he's unlikely to play next week.

"Any team would miss someone like Sam but there are no excuses. We came here expecting to win and I thought we had the game plan to win.

"We played well in parts but you have to commend Huddersfield. They played well. Paul has done a great job and I'm really pleased for him, being an Englishman as well.