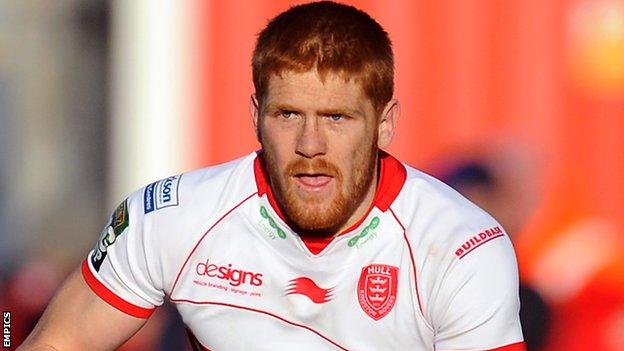 Hull Kingston Rovers ran in eight tries at Craven Park as they clocked up their first Super League win of the season at the third attempt.

Omari Caro, Dale Ferguson, Kris Welham, Graeme Horne, Greg Eden then all crossed before the break for a 34-0 half-time lead.

Winter signing Gareth Hock got his first try for Widnes, who also crossed through Alex Gerrard and Rhys Harbury.

Rovers had lost their first two games to Catalan Dragons and Wakefield but, once they had gone in front, when Caro's superb 60-metre break was finished off by Dobson in the corner, they never looked back.

Another fantastic piece of running from Caro then saw him cross over after he intercepted Hanbury's loose pass.

And Ferguson powered over before Welham, making his first appearance of the season, scored following good work from Evarn Tuimavave.

Horne came off the bench to score with his first touch after a neat offload from Rhys Lovegrove.

Eden then capitalised on more good work from Lovegrove to leave Dobson to kick Rovers into a 34-0 lead at the break.

On-loan Wigan forward Hock finally got the Vikings on the scoreboard, his try being converted by Hanbury, who then added the extras to a score of his own.

The Widnes fightback was short-lived, Heil touching down before Hall raced away to put the Robins 32 points clear.

But the Vikings did have the final say, with Gerrard's late consolation try, converted by Hanbury.

"We were always confident in our ability. If you look at the first two games in great detail, we had chances to win them both.

"I was very happy with the first 40 minutes. We controlled the game and scored some very nice tries.

"It all goes back to possession. When you defend set after set like we did in the first two games it's awfully hard.

"But we now need to back this up next week against Salford."

"It looks like we got a flogging, but I'm disappointed with the scoreline. Conceding 40 points is not good enough for this team any more.

"We've started the season well and I thought we could come into this game and win. But they got their enthusiasm from the crowd. They scored 10 points quickly from us throwing the ball on the floor.

"We reverted back to what we were doing at the start of last season and they got on a roll. The scoring system will do that to you and you're behind by 18 or 24 points in no time.

"But doming out and responding in the second half was something we wouldn't have done last season."