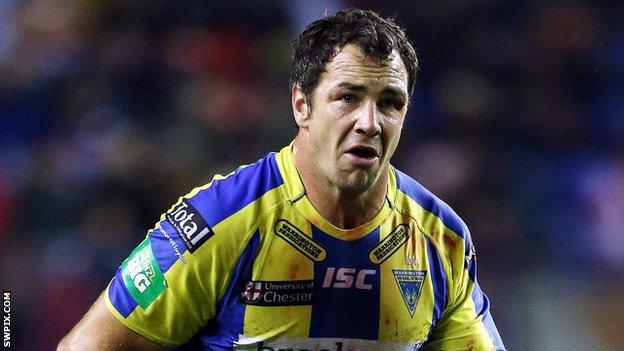 Warrington will be without veteran captain Adrian Morley for at least two months after he tore a bicep in Friday's win against Catalan Dragons.

The 35-year-old forward was hurt in the opening minutes of their which briefly took Tony Smith's side top of the Super League table.

Coach Smith confirmed to BBC Radio Merseyside that Morley has had surgery.

"He's had to have an operation on his bicep so he's going to be missing for eight weeks, maybe longer," he said.

Morley was hampered by a number of injuries during the 2012 season, but in the final weeks of the campaign, skippering Warrington to a Challenge Cup victory and a first ever Grand Final, as well as

But speaking to BBC Sport on the eve of the new season, Great Britain international Morley said

Meanwhile, Warrington half-back Lee Briers suffered a neck problem against the Dragons and will not be available for the trip to Hull FC on Saturday.