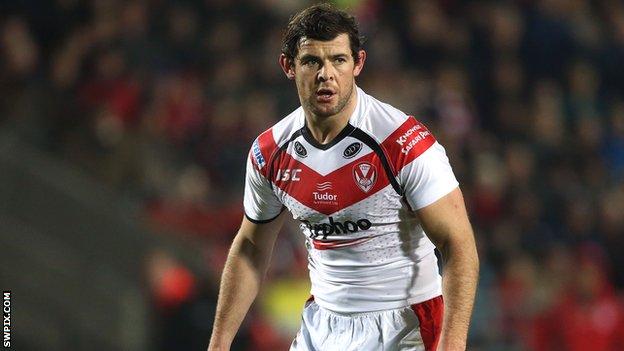 St Helens will be without Paul Wellens for a month because of a calf injury.

The 32-year-old full-back was hurt during and the loss of his captain has added to coach Nathan Brown's injury woes.

Brown told BBC Radio Merseyside: "We've got some blokes in key positions that have missed games, which doesn't help when you're trying to get some flow."

The former Huddersfield Giants coach continued: "It happens to all teams at some stage of the year and we're going through that stage at the moment.

"With the squad we've got and the younger players we've got coming through the system, we'll unearth someone who will be great.

"It will give someone else a good opportunity to show what they can do and show that they're a Super League player, either now or in the future."

Saints have made a mixed start under new coach Brown. They in their first Super League match of 2013, then before battling to a draw with Hull.

And the Australian says he can understand any frustration brewing among St Helens supporters, adding: "Fans want to win, as players do and coaches do.

"I said at the start of the year that it would take us a good six or seven weeks to get going where we would like to.

"We were never going to hit the ground running because we're trying to do some things a little bit different and it takes time.

"Once we get the consistency right and I've learned a little bit more about the personnel, I'd like to think things will improve gradually."