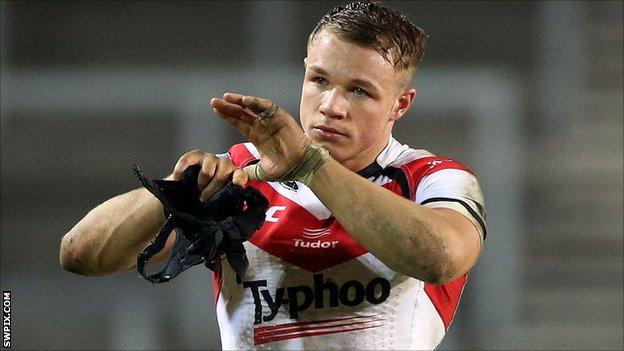 Jonny Lomax helped himself to a hat-trick as St Helens brushed Bradford aside at Odsal to maintain their 100% away record in 2013.

Gary Wheeler kicked four from seven to add to the tally.

Brett Kearney and Elliott Kear responded for Bulls after the break, who were unable to address the half-time deficit.

Bulls had begun the day in fourth with two wins from their first three matches, although Saints were to make light of their mixed start to the campaign by flying out of the blocks at Odsal.

Paul Wellens' absence through injury saw Gary Wheeler come into the halves with Lomax switched to full-back, and the 22-year-old flourished in the space.

Jonny Lomax certainly played well. The best modern-day full-backs are half-backs. He's athletic, he can pass and kick and see the game well.

Nathan Brown's side ruthlessly punished Bulls' indiscipline during the first-half and took just two minutes to go ahead when a move swept across from the right put Lomax in.

Manu was heralded as a marquee signing on his arrival from Hull FC in the winter and the second-rower showed why he was coveted with a storming finish through the defence to add to the lead.

Penalties created the platform for further Saints tries from Laffranchi and Puletua, the latter holding off four tacklers to score, either side of a Lomax try which owed much to the drives of Sia Soliola and Alex Walmsley.

The home side were the next to profit from a penalty when Bulls full-back Kearney latched onto an offload to give hope to Francis Cummins' side after the break.

Saints restored their dominance when neat offloads from James Roby and Francis Meli allowed Lomax to go over, and the scorer turned provider to feed Gardner for his try.

Elliot Kear scored a late consolation for Bradford and Jamie Foster then added the extras against his former club.

"We had very little possession in the first half an hour. They got a good roll-on and we spent too much time near our own goal-line.

"You can't afford to play against the main teams without the ball. At the back end of the first half we asked some questions. We opened them up but couldn't finish off.

"I was pleased with the fightback and in the second half we were able to trade sets but we need more quality than that to beat St Helens."

"From round one to four, we have definitely got better. I thought in the first 40 minutes we played with good discipline and control.

"We let ourselves down in the second half but we did things more consistently for longer today. I'm sure we'll improve again. It will be a big challenge next Friday. Leeds are a good side and they did the competition a good service last night with the way they performed.

"Lomax certainly played well. The best modern-day full-backs are half-backs. He's athletic, he can pass and kick and see the game well. I don't think it was a genius move."