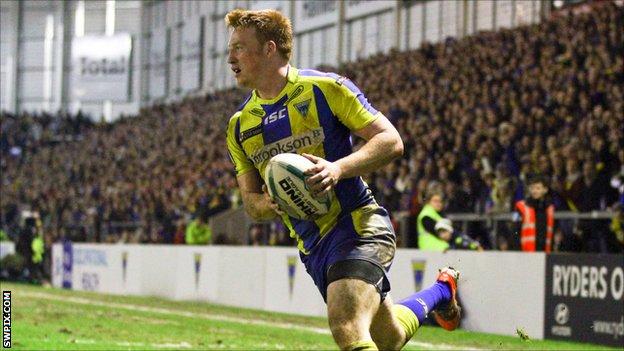 Warrington needed a second-half flurry of tries to overpower a spirited Hull FC side in an intense encounter.

The home side led at the break through Joe Westerman's converted try, with Chris Riley replying in an aggressively contested first 40 minutes.

However Joel Monaghan's brace, added to by a second for Riley and Micky Higham's 100th career score, put the game out of sight for Warrington.

Ben Crooks ended the scoring with a consolation for the tiring hosts.

Victory was hard-earned for Warrington after a punishing first period, and it took its toll on Hull as they ran out of steam in the second.

The first half crackled with intensity, with clever football, physicality and uncompromising defence compensating for a lack of points across the board.

Wire reacted first, crossing after four minutes when a flowing move to the left involving Richie Myler and Brett Hodgson fed Riley to slide in out wide.

It looked ominous but the home side battled back brilliantly.

Danny Houghton was the catalyst, forcing a knock-on from Hodgson with a clever chip through and Westerman capitalised from the resulting tap to cross.

Crooks's kick eased Hull ahead, although they needed Shannon McDonnell and Ben Crooks to be on their mettle when Trent Waterhouse was held up.

Tony Smith's side dominated the possession but with Horne's kicking pinning them back in their own half, they struggled to find field position.

After the break both sides were coughing up possession under pressure when close to the try line but eventually the Challenge Cup holders found a chink in the Hull armour and racked up four scores.

After forcing repeat sets, Ratchford's chip was gathered by Joel Monaghan ahead of the Hull defence and the winger touched down for his fifth of the season.

That score seemed to dent the Airlie Birds confidence and Warrington capitalised with two rapid-fire tries to put the match out of sight.

Chris Hill's monster carry and offload found Myler and he picked the perfect ball for Riley to notch his second of the night, and with Hull creaking, Michael Monaghan dummied to find the gap and picked Higham from a string of supporting runners for his 100th career try.

Joel Monaghan then made the best of Myler's kick to pounce for his second, before Crooks smuggled the ball over the line for a Hull consolation, and his defence denied Waterhouse a score at the other end.

Ratchford denied Hull a further score when he snared Lineham out wide, and Warrington saw out time as the snow tumbled in East Yorkshire to go top of Super League before Huddersfield's trip to Wakefield on Sunday.

"I'm disappointed. We seemed to be stringing a 15 minute period together of absolute horrible football and we do it every game.

"We've got to get it out if we've got aspirations to go anywhere. What we did with the ball contributed. We did well in the first half, how we started with the sets and finished them.

"We knew they'd come out of the blocks and try to low us off the park throw the ball around, everything they did we watched during the week and were prepared for but that 15 minutes we keep doing was horrible football.

"Daniel Holdsworth copped a knock last week and had concussion, he trained on Wednesday but had headaches, so he's got to rest this week."

"We felt like we were a little bit off the pace that we like to play in the first half. That can happen in games but that's not taking anything away from Hull, they threw some things at us and both teams defended fairly well.

"Sometimes when you sit on the bus for a couple of hours you don't have the same energy and we had the first-half blues. Somebody had to lift a bit because it was so evenly matched. I like the fact that we could tough it out and lift when needed.

"I thought there were some real stand-out performers today, Michael Monaghan was back to some of his best play. Not everything came off, he was dangerous, he was running and he was pulling some strings for us."