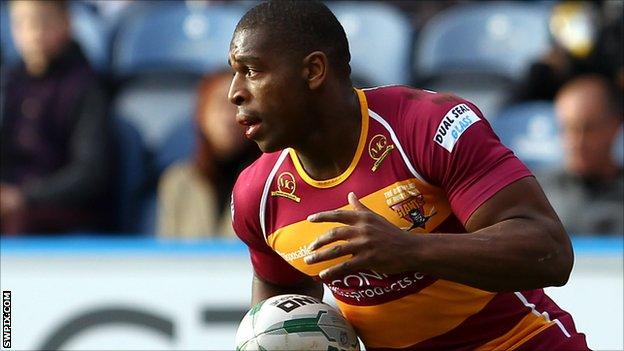 The visitors were made to work hard for the win and Wakefield could have stolen victory had Lee Smith's late score not been chalked off.

I genuinely do believe the best team lost

Victory restores Paul Anderson's side to the top of Super League after St Helens and Warrington both won on Saturday.

Richard Agar's Wakefield bounced back from a disappointing defeat against Bradford on the opening weekend to beat Hull KR and London Broncos, but will feel aggrieved to get nothing from this encounter.

Giants came into the game with three wins from three and made a flying start with a blistering first 10 minutes.

Winger McGillvary touched down after three and a half minutes after good work from Shaun Lunt and Luke Robinson, and extended his tally to four for the season soon after when gathering Scott Grix's chip-kick.

Fox picked up on Richie Mathers' half-break to run in from 40 metres out for Wakefield's first points, and Sykes kicked the conversion and then a penalty to put the hosts ahead.

However Brough, who missed his first two kicks, soon found his mark to restore Giants dominance before half-time.

First he nailed the kick when Wilkes knocked on from kick off and, when David Faiumu forced a penalty, he again slotted over.

McGillvary racked up a hat-trick when he gathered in a looping ball from Robinson minutes after the restart, but Wakefield showed mettle to respond.

Smith scored on his return to the side when he dropped onto Ben Cockayne's grubber to set up a nervy finish and the provider turned scorer when he went over in the corner.

Paul Sykes missed the conversion to leave the match on a knife-edge and, when Smith's second score was ruled out right at the end, Giants breathed a sigh of relief to retain their perfect record.

"We might shaded it over the 80 minutes. We certainly had opportunities to win it.

"Our passing let us down a little bit but there was a lot of positives in terms of the effort and commitment.

"We punched holes in them but they defended really well at times and made it tough for us to crack them. I thought it was a good old-fashioned contest.

"If we continue to play with the same commitment we won't go far wrong this season. I was really encouraged by a lot of things we did today."

"I genuinely do believe the best team lost.

"With the amount of possession they had on our line, I thought Wakefield deserved to win. Their six and seven controlled the game.

"We committed rugby league suicide at times out there. Credit to Wakefield, they kept plugging away and created opportunities.

"I'm sat here half dejected but one thing I can't fault our boys this year is that working as hard as they possibly can for each other."