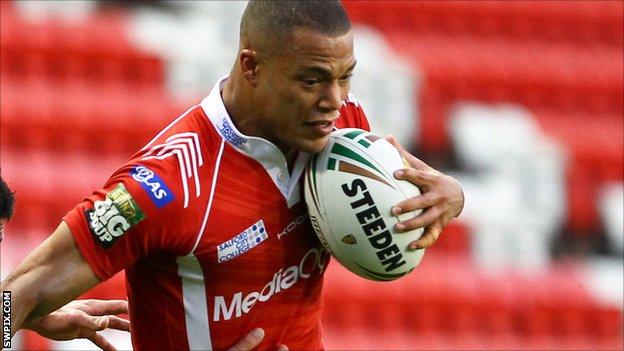 Danny Williams scored a late try as Salford beat Hull KR to secure their first win of the season.

Rovers led with nine minutes to play but Wayne Godwin and Williams scored to turn the game around.

The visitors also led 24-14 at the break in an open half, and were 34-14 up at one stage before Salford fought back to seal victory.

Lee Jewitt and Adam Walker were sent off in the final minute for fighting as tempers boiled over.

Rovers showed why they were among Super League most prolific sides going forward with some high-quality plays, largely engineered by the quality of Dobson and Eden.

However, Eden at full-back was exposed on occasions, none more so than when he was unable to snuff out Ryan McGoldrick's chip through and Williams accepted the loose ball to scoot over.

Victory for Salford was especially sweet for Martin Gleeson, who was handed a return to professional rugby league after clearing an 18-month drugs ban imposed when he was at Hull FC.

Salford, who lost their opening three games and have conceded more points than any other side following this game, were competitive and half-back Sneyd impressed with boot and hand as a creative force.

While the match provided huge entertainment value, coaches Phil Veivers and Craig Sandercock will have been concerned at the ease in which tries were scored throughout.

The game was mere minutes old when Salford coughed up possession through Rhys Williams' knock on, and Hodgson was in against his old club after a direct run and pass from Eden.

Caro bombed a try moments later, but Dobson added his first try after Eden and Hodgson picked up on another Reds error.

Salford responded well with a brace of tries from Gibson, both assisted by Sneyd.

Firstly, the former Leeds centre stepped inside off the left following the half-back's looped pass, and he then chased through a grubber to touch down.

Sneyd's cheeky ball-strip on Eden saw him score to give Salford the lead but the lead was wiped out within minutes.

Dobson went over for his 50th try in Rovers colours after he was found by Eden, with Cory Paterson the catalyst from his carry, and then Dobson and Eden teed up Caro to end the first-half scoring.

After such an open half, both sides tried to clamp down on errors, but there were moments of quality to light up a tight second period.

England Knights full-back Eden took an inside ball from Dobson to streak over for his first and then slipped a tackle from Martin Gleeson to pick up his second.

Rovers looked home and dry, but Salford had other ideas.

Sneyd slid another deft kick through for Dixon to latch onto in goal for a Reds try, and soon after Murphy stepped his way to the line.

Reds were just two points behind when Wayne Godwin crossed and once Williams had scored, Murphy stopped Caro on the line in a crucial last-ditch tackle.

Jewitt and Walker were sent off with seconds remaining as tempers boiled over, but Salford held on to secure the victory.

"It's been a long drought since our last win and I will enjoy this result. We spoke at half-time when we were 10 points down that we had the ability to win the game if we protected our goal-line.

"The problem was we let in another 10 points early in the second half. We conceded some soft tries and did well to score 38 points but to concede 34 is still not acceptable.

"It's a massive result for the club. We could have gone on to concede 50 points when we went behind 34-14 but we scored some really nice tries."

"We were well in control of that game but our ill discipline and errors cost us the game.

"We need to rectify it and rectify it soon. There's nothing wrong with our attack so we've got to get our defence right.

"We made way too many errors, and first grade footballers shouldn't be making those errors, but it will turn, if we train hard and do the little things well."