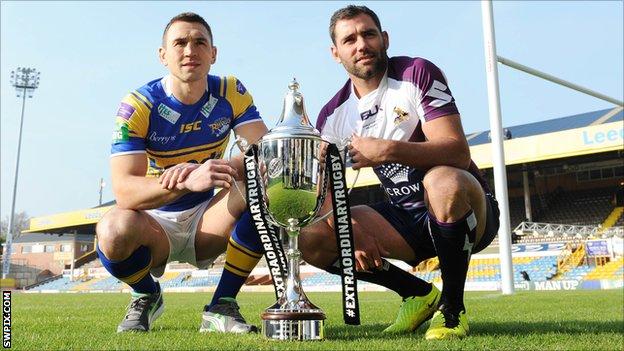 Kangaroos skipper Smith, 29, will lead the 2012 NRL winners against in the third WCC meeting between the clubs.

"I enjoy watching the way he plays his football and I'm sure he'll be at the forefront on Friday."

The rivalry, albeit a friendly one, has been nurtured by two players at the top of their game at domestic and international level.

Smith missed Melbourne's 2008 defeat by the Rhinos through the birth of his first child, but returned to lead the NRL champions to victory at Elland Road in 2010.

Smith on the business and pleasure of a rugby tour

"Speaking of my personal experience, I really enjoy coming here to play, the atmosphere is something you don't get in Australia.

"We get big crowds, big stadiums that get filled out, but the songs the fans sing and the applause you get for good play is a bit different to back home.

"When I was a young guy watching the touring Kangaroos come here and play at all these grounds, it's something I wanted to be a part of.

"Outside of football, half of the players have never been to Europe before, one of our staff members has never been before, he's never seen Buckingham Palace or London Bridge.

"This might be the only trip we get, everyone's embraced it so far."

He also had the upper hand with Australia against England on that same ground in the 2011 Four Nations Final, but the Dally M hooker of the year for last season was pipped to the Golden Boot by Sinfield, 32, in 2012.

"The times I've come up against him there's never been any hard feelings, it's well deserved, he's been a terrific player for a long time now," Smith added.

"He's been a great leader for Leeds and England, he's captained them to six Grand Final wins which is a pretty special thing to do."

Despite the Brisbane-born playmaker's experience of British venues with club and country, Friday night under the Headingley lights is unchartered territory.

although Smith is excited rather than intimidated by the prospect.

"I spoke to Kieran Foran [Manly half-back] about the game and he said it's a hostile environment," he continued.

"I walked out on the ground before for some photos and I can believe it, the crowd are right on top of you.

"That's what makes it so special for Australian teams coming here because we don't get that, we've got a lot of space between us and the crowd, but it's something we need to enjoy.

"We need to enjoy going out there and having the crowd getting into us and singing their songs because if you don't it has an effect on the way we play.

"If we go out there and are positive about the way we play, usually you go alright."