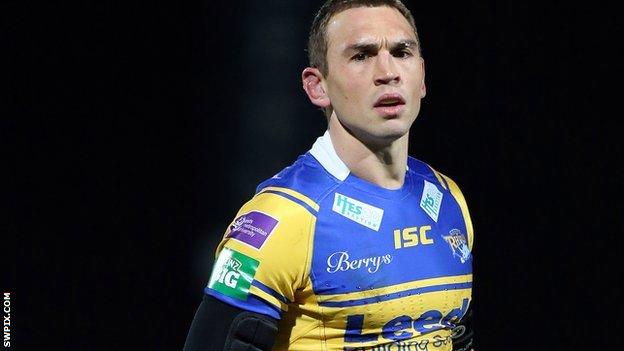 Leeds skipper Kevin Sinfield has backed calls for the World Club Challenge to be extended to incorporate more teams.

Since 2000, the competition has always been held in England as one-off match between the winners of the two leagues.

"I think it would be a great idea to expand it," 32-year-old Sinfield told BBC Radio Leeds.

Clubs from both leagues have reportedly agreed in principle to making the Challenge a six-team event and to stage it in Australia.

"I remember in 1997 when every club was involved and that was probably a bit much, but if we could get to three Australian and three Super League teams I think that would be brilliant," said Sinfield.

"It would be great to take the sport to a new place and a new audience to really sell it."

Friday's match, meanwhile, will be the third Challenge meeting between the two sides, the previous two having taken place at Elland Road.

The Rhinos ran out 11-4 winners in 2008, but two years later the Storm recorded an 18-10 win, only to be later stripped of the title for breaching the salary cap.

Sinfield, who won the Golden Boot last year, would have preferred this year's match to have been played in Australia.

"Given the choice I think we'd have loved to have gone out there to Melbourne," he added.

"It would have been the ultimate challenge for us to go down there. But this is the next best place if we can't."