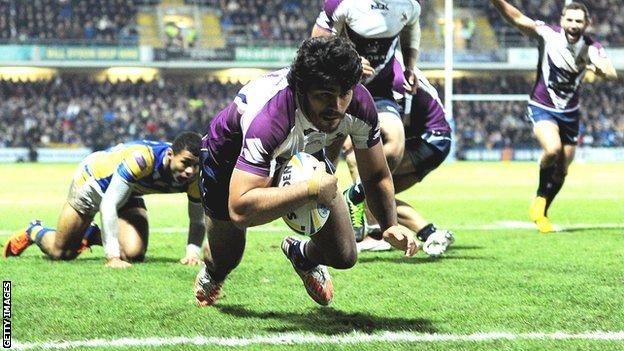 Tries by Slater, Jesse Bromwich, Tohu Harris and a six-point haul from Smith were enough to confirm victory.

Missed chances proved costly for the hosts, but they played their part in a match which justified the pre-match hype.

With the ground packed to the rafters and a big-match atmosphere, it was clear to see why Leeds had again opted to host the fixture on home turf.

Talk prior to the match centred on the outlawing of the popular shoulder-charge, but the contact was no less savage for it as both defences tucked in with some meaty tackling.

Leeds spent much of their warm-up putting the three-quarter line and full-back under a succession of high-balls, but there was little the quintet could do to cope with the kicking of Smith and Cronk as they peppered the try-line.

Skipper Smith was at the heart of the early exchanges, and he opened the scoring with an easy penalty after Watkins had spilled a high bomb in front of the posts.

Storm extended their lead when Ryan Hoffman, a veteran of Headingley from his time with Wigan, crashed through a gap and slipped an inside ball to Slater who streaked home from close in.

The furious pace resulted in some loose handling, notably from Rhinos' usually reliable Danny McGuire and Rob Burrow, while Hall and Joel Moon were both unlucky to be denied out wide as Melbourne stood firm.

Brian McDermott's side eventually found a way through when repeat sets gave Rhinos field position and a slick move from right to left found England international Hall with enough space to touch down on the whitewash.

Sinfield added the extras, and had the last say of the half when he swung his boot to level with a penalty.

Having earned the right to contest the World Club Challenge by virtue of their Super League success, Leeds were made to dig deep for the character and belief that has led them to consecutive titles as Melbourne opened up an early second-half lead.

Prop Bromwich showed nimble feet to pick his way through the blue and amber and just squeezed the ball onto the whitewash with momentum before another slick move from Storm saw Harris eventually run in.

Jones-Buchanan provided the route back into the match, but the score owed much to the ingenuity of Hall and Moon in keeping the ball alive on the last tackle after Sinfield's chip kick was pumped into the Melbourne 10.

Mahe Fonua was unfortunate to have his score chalked off when it was deemed the ball had gone forward in the build-up, and Gareth Widdop's double movement led to a similar outcome with minutes to play.

Rhinos poured forward as the clock ticked down, but a forward pass in a final minute flowing move summed up their fortunes as Melbourne followed up their 2010 success with victory in West Yorkshire.

Leeds Rhinos coach Brian McDermott said: "Melbourne are very good and they snuffed us out, but we don't like losing.

"The whole package was hard, it took so much out of us to try and break them down that we didn't take our chances at the other end.

"When you look at the tries we conceded they might look simple, but they are on the back of a lot of pressure we have soaked up.

"But this isn't a 'never mind' feeling and I don't feel like smiling. We're not far off one of the NRL's best teams but this will take a while to get over.

"It's not a two-day thing, we have plenty of bruised bodies in there as well as egos."

Melbourne Storm coach Craig Bellamy said: "We didn't come here to treat this as a trial game, this was important to us.

"If we are going to come to England we want to win and I can't fault the players.

"We were here with the right attitude, they've not complained about the cold once or anything like that, and we know we have taken pride in our performance on behalf of the NRL."