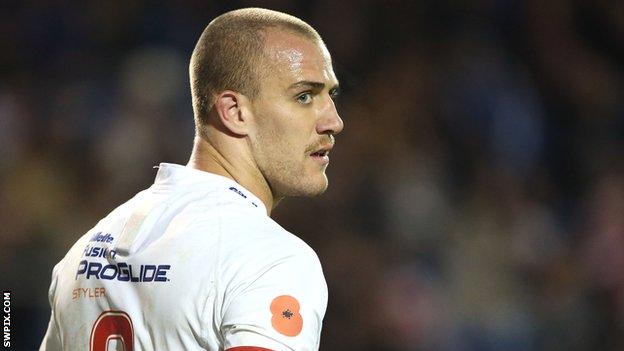 Wigan Warriors and England prop Lee Mossop will miss the next 12 weeks after dislocating his shoulder in Sunday's 48-18 win over London Broncos.

Wigan coach Shaun Wane told BBC Radio Manchester: "We're under the pump with our front-rowers at the moment.

"We will be tested in the next few weeks and I'm looking forward to seeing how (Wigan's youngsters) all react."

He continued: "The pack that finished the game had an average age of about 22. To 'nil' a team in the second half like we did against the Broncos is outstanding."

I can understand Sam's frustration because I was frustrated, but I kept my mouth shut and I expect him to do the same

Wigan bounced back from their first defeat of 2013 at Huddersfield eight days earlier by running in nine tries in their victory against struggling London.

The win was achieved despite star full-back Sam Tomkins being shown a yellow card for dissent in the first half.

"You can not speak to referees that way," said Wane. "I don't know what he said, but it must be quite serious if he's sin-binned him.

"The call was wrong and I can understand Sam's frustration because I was frustrated, but I kept my mouth shut and I expect him to do the same.

"He knows he can't do that sort of thing. He's smart and he's a competitor, but that's what I love about him. He wants to win and sometimes he goes over the edge."

Meanwhile, 19-year-old winger Dominic Manfredi has signed a contract until 2014, with the option of a further year.