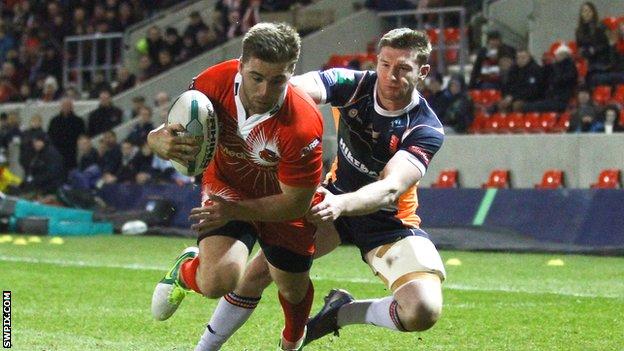 Head coach Phil Veivers believes Salford's first win of 2013 is a huge boost for the club and their supporters after a tough winter for the Reds.

Sunday's 38-34 victory against Hull KR was the first since of the Super League club.

It also lifted the Reds off the bottom of the table after three early defeats.

Veivers told BBC Radio Manchester: "For the club and the fans, it's massive. They've stuck by us through the off-season and they've hung in there."

He added: "It's the start of what Marwan wanted. He wants to build a dynasty and that's a start.

"The foundations are now in place and we can only build one brick at a time - that's probably the first brick."

Meanwhile, Koukash is quoted in the Manchester Evening News saying he has made an ambitious bid to sign Wigan and England full-back Sam Tomkins.

Under the terms of his deal, the 23-year-old is not allowed to speak to other clubs until the end of next season.

Koukash said: "I have contacted Wigan to tell them I am interested in signing Sam and would be prepared to pay a transfer fee for him. That's all I can say at this stage. We'll see what happens."