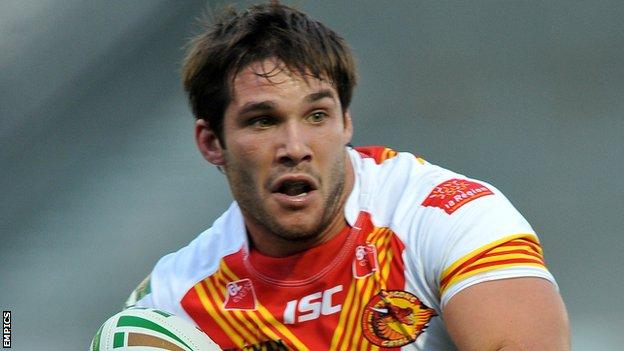 A late Jason Baitieri try saw Catalans come from behind to beat Wakefield.

Richie Mathers, Peter Fox and Dean Collis all went over to put the visitors into an early 16-0 lead.

But first-half tries from Mathais Pala and Gregory Mounis made it 16-12, before Damien Blanch crossed to pull Catalans level after the break.

Lee Smith's try put Wakefield back ahead, but Blanch's second and Baltieri's score, either side of a Thomas Bosc drop-goal, sealed victory.

The French side's late surge moves them up into second place in Super League, above Warrington by virtue of points difference.

However, the Wildcats' second successive defeat will come as a hefty blow for the side in a week where their main sponsor Eric France ceased trading, leaving the club facing a possible funding shortfall.

But they appeared to put the off-field uncertainty aside for the trip to the Stade Gilbert Brutus, going three tries ahead midway through the first half.

Frankie Mariano broke through and laid on Mathers to cross early on, before Collis fed Fox for a second shortly after.

Collis then went over himself following an Ali Lauitiiti break to put the visitors into a commanding position, with Paul Sykes kicking the extras for the second time in the match.

But Pala went over and Mounis capitalised after Kyle Amor gave away a cheap penalty to give the hosts two tries in quick succession, signalling the start of a Catalans fightback.

Wildcats' Mathers was deemed offside when grounding what would have been his second and Blanch made him pay when he squeezed in to level, but Bosc missed the extras to leave the scores at 16-16.

And despite Smith scoring and Sykes converting for Wakefield, Blanch snuck in for his second, before Bosc, who converted three times in the match, dropped a goal to put the hosts ahead for the first time, and Batieri then crossed in the final minute to wrap up the two points.

"We didn't play to the standard we expect of ourselves tonight, especially in the first 40 minutes.

"At half-time everybody looked at each other in the eyes and said 'that's the standard and we don't want to play at that standard any more'.

"In the second half we could see that the players wanted to improve themselves and the standard they played to.

"Our team-spirit and team ethic won us the game tonight, not the execution, not the show and go and not running good lines because we were not there with those tonight.

"But the spirit was outstanding and won us the two points."

"Just after half-time we were left with two replacements on the bench after losing Andy Raleigh and Frankie Mariano and that really hurt us.

"I thought our energy levels were extremely low and if you add a 12-3 penalty count against us to that as well, then it is no surprise that we were dead on our feet at the end of the game.

"I'm usually disappointed if we were nine penalties worse than the opposition. "I've seen a first half where a team has received two penalties for shoulder charges, yet I've seen three against my team that have gone unpunished.

"I just can't quite work it out. And it really came back to hurt us at the end of the game with our lack of energy and some of the decisions that went against us."