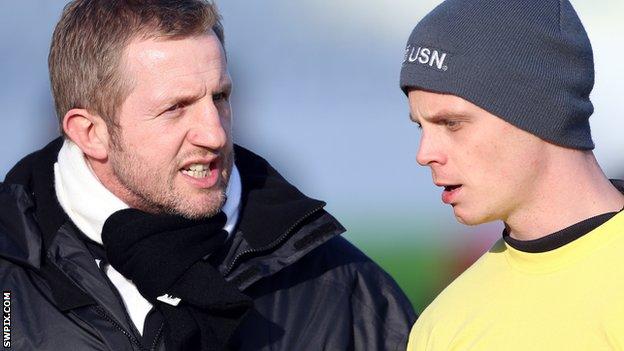 Widnes ran in seven tries to beat Hull but the victory was soured by Kevin Brown's early departure to injury.

Hull led at half-time with Joe Westerman, Ben Galea and Tom Lineham crossing for the Black and Whites.

But two tries apiece from Paddy Flynn and Cameron Phelps, plus scores from Chris Dean, Frank Winterstein and a second in Widnes colours for Gareth Hock, sealed a first home win.

However, Brown's debut ended after an hour because of an ankle problem.

Coach Denis Betts will assess injuries to the former Huddersfield half-back, who has recently recovered from ankle surgery, and centre Stefan Marsh before the visit of Bradford on Friday.

But he would have been delighted with the spirit shown by his players to fight back from a slow start.

In the corresponding fixture last season, Widnes ran in eight tries in a 42-16 success against Hull at the Stobart Stadium

Hull had scored the first try before Widnes had felt the ball in hand. Vikings winger Flynn failed to gather the kick-off cleanly and was subsequently dragged into touch.

From the resulting set, Hull worked a three-on-one overlap near the right touchline and Westerman cruised in from close range.

It could have been worse for the home side but Gareth Hock's flying challenge prevented Tom Lineham adding a quick second and, having broken the line, Tom Briscoe ran straight into Rhys Hanbury.

Jon Clarke's 40-20 kick gave Widnes a foothold in the game and, after a sustained spell of pressure, Flynn atoned for his earlier error by brushing off three tackles to touch down for his first try of 2013.

Hanbury failed to convert and then Hull extended their lead through Galea's try, after a high tackle from Hock had been penalised by referee Richard Silverwood.

But Widnes, who had lost their previous two Super League matches, got back to within two points when Flynn intercepted Brett Seymour's pass and ran the length of the field to notch his second score.

And if their start to the first half had been poor, the way they started the second period was anything but.

Phelps collected Hock's offload and somehow evaded the touchline to put Widnes in front, before Dean jumped highest to grab a high kick and touch down under the posts.

As Hull's error count grew, Widnes regrouped after the losses of Brown and Marsh and stretched their lead with another Phelps try, before Lineham's long-range effort reduced the deficit to eight points.

However, Samoan forward Winterstein crashed over for his second try of the season with 10 minutes remaining and there was still time for the increasingly influential Hock to grab his second try in two games and secure a second win in 2013.

"Kevin will have a scan and we are looking at it positively and maybe it's just a twisted ankle. But Stefan could be out to 10-12 weeks.

"We made a dodgy start but stayed solid. We had to work hard and it's never unexciting coming here.

"I am happy with the way we defended and Gaz (Hock) is exciting and good for the team. He's going to get better but can do things other players can't do.

"Ben Cross also gives us a bit of punch but I am not satisfied with two wins out of four because we should have beaten St Helens too."

"We did not give ourselves a chance with a poor completion rate and too many penalties.

"We have to do a lot better than that. We have made no progress from last year and need to make changes. The personnel out there aren't doing it.

"We need our two key signings Gareth Ellis and Daniel Holdsworth back, but the players out there should have done the job and didn't."