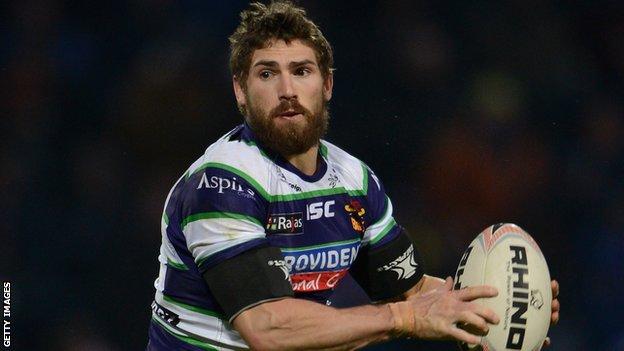 Jarrod Sammut scored a hat-trick as Bradford inflicted a first defeat of the season on leaders Huddersfield.

The visitors got off to a dream start thanks to converted tries from Sammut and Matty Blythe.

The Giants hit back through Joe Wardle and David Faiumu, before Danny Addy and Brett Kearney responded for the Bulls to make it 24-12 at half-time.

Shaun Lunt's score reduced the arrears but Adam O'Brien and Sammut were on hand to secure Bradford's victory.

Some of the errors we came up were childish, dropping the ball with nobody in front of you

The Giants stay top of the table after second-placed Warrington but their performance failed to reflect the league standings.

Huddersfield were hindered by the absence of skipper Danny Brough, who pulled out through illness, and were error-strewn from the outset.

It was Scott Grix who gifted Bradford their first score, fumbling Sammut's grubber kick to allow the Australian half-back an easy try, while Blythe went over for the second.

Jamie Foster added both conversions to make it 12-0 and Huddersfield coach Paul Anderson immediately withdrew Tonga international Ukuma Ta'ai, who made an inauspicious opening to his first start for the club.

The Giants cut the gap to two points as former Bradford centre Wardle crashed over, before loose forward Faiumu finished off a fine passing movement by forcing his way across the line from close range and converting.

Bradford maintained momentum with two more tries in a 10-minute spell before half-time - Heath L'Estrange feeding Addy and Foster converting, while full-back Kearney went over and kicked the extras.

Huddersfield pulled two points back on the stroke of half-time through the boot of Grix, but they fell further behind within five minutes of the re-start.

Grix gathered Addy's grubber kick behind his own line but was dispossessed by Sammut for his second try, converted again by Foster.

Grix made amends for his latest error by launching a kick that bounced awkwardly on the Bradford line and produced a try for hooker Lunt and Grix added the extras to make it 30-18.

Replacement O'Brien then scored with his first touch to register his first Super League try.

Sammut piled more misery on the hosts by landing a drop goal and then completed his hat-trick in the last move of the match, as Foster landed his sixth kick.

"Some of the errors we came up were childish, dropping the ball with nobody in front of you. It robbed us of energy.

"It was a combination of what's happened over the last few weeks. We gave the ball away against Wigan and Wakefield and just got through the games but, if you keep doing that, eventually you are going to get burnt.

"Bradford got what they deserved and we got what we deserved. There was a real distinct lack of urgency with the ball."

"We started really well and we needed to after last week. If you get a good start you get a bit of momentum.

"We knew they would come back but we were able to put a few more punches on the chin.

"I'm really pleased with how they performed. We know what sort of team we are. If we've got everybody 100 per cent sticking to what we do, we can cause people a bit of trouble.

"I'm really proud of how hard they worked."