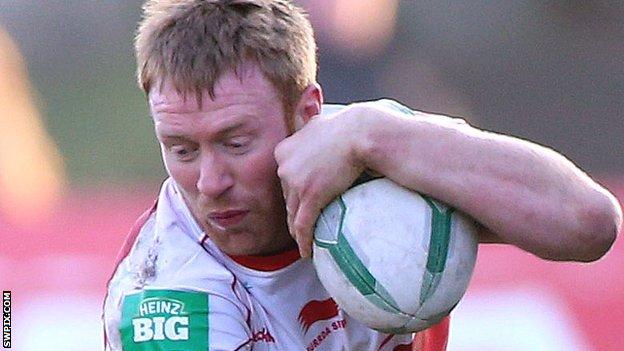 Dave Hodgson scored two tries as Hull KR came from behind to beat Warrington, who missed the chance to go top.

The home side went ahead with Hodgson's try, but the visitors hit back with two scores in nine minutes from Stefan Ratchford and Ryan Atkins.

Hodgson and Alex Brown ran in late tries and Dobson took his tally to 10 points to seal an impressive win.

We're not getting carried away by this result

Warrington would have gone to the summit of Super League with a win, as previously unbeaten Huddersfield were beaten

It was a second win of the season for Hull KR and they moved two points clear of basement side Salford City Reds, who sacked

The home side's first try was well worked by debutant Travis Burns and Dobson as they created an overlap on the left with Hodgson going over, although Dobson missed the conversion.

Dobson was more accurate with a 18-metre penalty to put the hosts 6-0 ahead, but the visitors grew in confidence as the half went on.

Poor defence from Hull KR enabled Ratchford to run in a try, while Ratchmond's cross-kick was caught by Atkins - who out-jumped Brown - for Warrington's second try, with Brett Hodgson landing both conversions.

Rovers had some extended pressure as the period came to a close but the visitors held out for a six-point lead at the break.

Hull KR piled on the pressure early in the second half and they got the try their dominance deserved as Dobson, who also added the conversion off the post, produced a clever pass to send Paterson free to go over on the left edge.

Dobson's 30-metre penalty soon gave the home side the lead and Hodgson extended it as he broke clear and went over under the posts for his second of the game.

Brown's score on his debut in the right-hand corner and Dobson's fifth successful kick completed a memorable win.

"We're not getting carried away by this result. Warrington had quite a few players out and that stifled their attack.

"But I want to give full credit to my players. The boys played well today after getting an even share of the play and penalties and we did some little things well.

"I just want to win every game we play and you want your players to stick to the gameplan and play to their potential, and my players did that."

"We weren't quiet sharp enough and didn't start the game as we would have liked. We did well to fight back and go in at half-time with a lead.

"They had some things they were trying to get over and they were desperate. It showed in the way they played and sometimes desperate like that can be enough."

"When you come to Hull KR, it's a tough place to go to. It's a hostile environment unless you take good control but we didn't do that.

"We'll lick our wounds and dust ourselves off for next week."