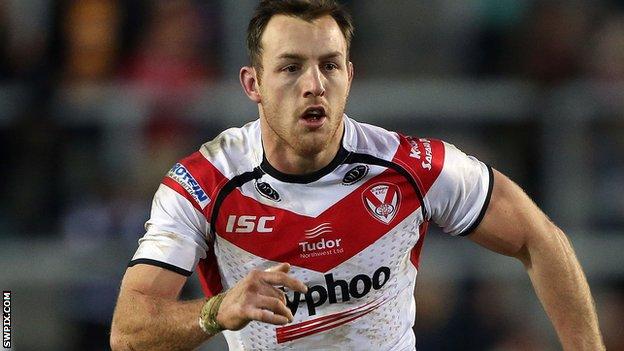 Hooker James Roby believes a killer instinct has been the only difference between his St Helens side and Leeds Rhinos in recent seasons.

The two teams have featured regularly in major finals over the past decade and meet at Langtree Park on Friday.

"We're both quality teams and been there or thereabouts for the last few seasons," England international Roby told BBC Radio Merseyside.

"Leeds have done that little bit better in finishing the big games."

The last nine Super League Grand Finals have featured either St Helens or Leeds Rhinos. Leeds have prevailed on all four occasions that they have met each other in the showpiece event at Old Trafford (2007, 2008, 2009 and 2011)

He continued: "It [Friday] is a massive game and we can't concentrate on little points here and there, or stopping one player. We're going to have to be alert across the field."

The Rhinos are defending Super League champions and have won the domestic title in five of the last six seasons, four of them coming as a result of Grand Final wins against Saints.

The Merseyside outfit have improved steadily under new coach Nathan Brown, putting in their most convincing performance of the season to see off

And Brown is excited about the prospect of coming up against the Rhinos, who narrowly lost the a day earlier.

The Australian added: "Leeds have been champions three out of the four years I've been here [working in England].

"I always enjoy coaching against Leeds and it's always a game to look forward to.

"We haven't married up a performance where we've had a really good defensive day and a really good offensive day, but we're improving and we'll need to improve a bit to do well against Leeds. We're all aware of that."