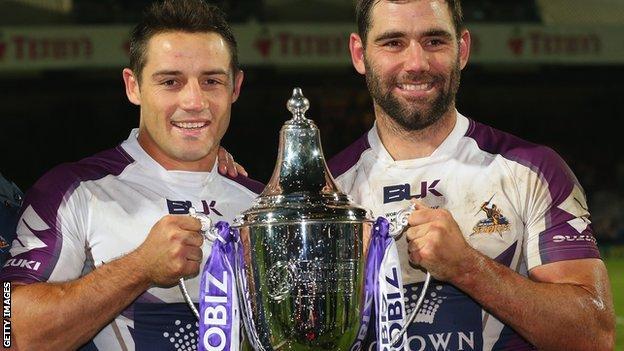 The last seven days of rugby league have provoked pride, caused concern and raised an eyebrow.

The pride came from a sell-out crowd at Headingley watching a spirited display from Super League champions Leeds in relinquishing their World Club title to the outstandingly strong Melbourne Storm.

Leeds captain Kevin Sinfield was still hurting when I saw him on Monday. He said defeats like that aren't just forgotten the next morning, or indeed the morning after that.

Jamie Peacock was a picture of devastation in the bar afterwards, sitting on his own behind a screen before entering to give a gracious speech to the fans. This meant a lot to the Rhinos and they weren't far off.

Developments elsewhere in West Yorkshire have been marginally more concerning, and Castleford fans could be forgiven for wondering what on earth is going on at their club.

First, chief executive Steve Ferres quit citing a difference of opinion with the board, and then commercial boss Nick Fozzard followed suit. Ferres says he is not convinced the current Tigers board is able to do enough to keep them in Super League.

His warning is that unless things change - namely a new or improved stadium - then Castleford Tigers will simply not be able to generate enough income to exist as a Super League club.

Their attendances remain more impressive than those at London Broncos or Salford, but Castleford are worryingly dependent on chairman Jack Fulton's money, as with David Hughes at London and now Dr Marwan Koukash at Salford.

Of course football is reliant on sugar daddies too. If Mr Abramovich got bored at Chelsea, they would be in one heck of a hole. But the spectrum of interested investors is far wider in a truly global sport like football, than it will ever be in rugby league.

Down the road at Wakefield, there was a setback too as the club's main sponsor went bust. Eric France, a local scrap metal company, has ceased trading, and this leaves Wakefield with a six-figure gap to plug in their budget. Wakefield are confident of finding a replacement.

Events in this area of West Yorkshire inevitably raise some renewed talk of a potential merger but I can't see much realism in that.

Sure, certain aspects of the two clubs' finances appear concerning and may prompt question marks over whether two Super League clubs so close together is a sustainable proposition.

Well, they've both survived until now and I know a lot of fans' passion is such that they would probably sooner entertain the thought of going bust and starting again than the notion of joining up with the "enemy".

The frustrating thing about this week for fans of these two rival clubs will be that there are really encouraging signs on the pitch. Cas welcome Wigan this week defending an unbeaten home record, and the Tigers look keen to make the Jungle a hostile fortress again.

Last week's draw with a big Catalan Dragons side showed they are making strides under Ian Millward despite their lowly league position. They've also accounted for champions Leeds at Wheldon Road.

I've been impressed by Wakefield too. Wins at London and at home to Hull KR came with real grit and attacking flair, and they were really unfortunate to lose by two points at home to top-of-the-table Huddersfield last week. Giants boss Paul Anderson felt the best team lost the game and I would agree.

So where was the eyebrow-raiser? Well at the risk of being a little flippant, that was my reaction to the news that the newly bankrolled Salford City Reds were to bid for Wigan and England superstar Sam Tomkins.

I did laugh at the audacity of Dr Koukash, and Wigan coach Shaun Wane admits he burst out laughing too, but Salford's new chief executive Ed Farish wasn't too impressed by their approach being met with such derision.

"Maybe those who mocked our ambition are inwardly a little bit unnerved by what is happening now at Salford, or maybe rugby league in the UK is just not used to moving at such a pace?" he told the Manchester Evening News.

Farish denies it was a publicity stunt, with talk now of a move instead for Gareth Hock. Yet it did gain publicity, and you can certainly applaud Dr Koukash for knowing how to get his club talked about in the press.

With former Wigan coach Graham Lowe now overseeing player recruitment at Salford, fans should realistically expect a couple of big names. But it is not a move I would expect union and NRL target Tomkins to make in a million years.