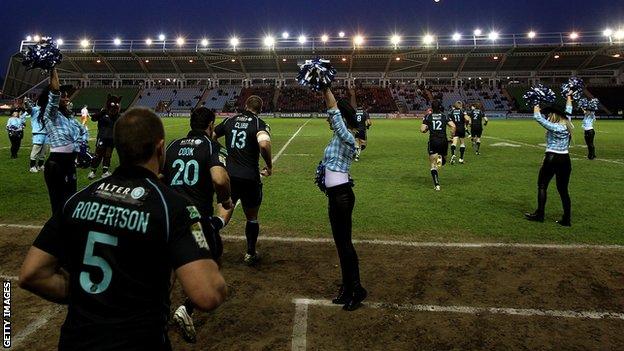 The chief executive of the Rugby Football League says the governing body needs to improve its strategy in London.

The capital has had a representative in Super League since its inception in 1996 but London's side has never won the league title or the Challenge Cup.

"It is almost inconceivable to consider yourself a national sport without having a strong presence in the capital. We just have to make sure that we get that presence right.

"It is probably not right as it is and we need to work with all the stakeholders to improve that.

"It is extremely important that we 'do London' and 'do London' well in terms of rugby league."

Three separate attempts to introduce a professional rugby league club in London had been made in the 1930s with London Highfield, Acton & Willesden and Streatham & Mitcham.

Semi-professional side London Skolars were formed in 1995 while Hemel Stags join the ranks in third tier Championship One this season.

London Broncos are England's sole Super League side south of Widnes while Hemel Stags, on the outskirts of London, have recently joined London Skolars among the semi-professional ranks.

The numbers of people playing the game in London and the south have grown since the advent of Super League, but Sport England cut rugby league's funding by £10.1 million in December.

Wood is keen that the sport continues to progress in the south of the country.

"First and foremost, there needs to be a very easily understood plan," Wood added.

"I think it is important we pull all the strands together to come up with a credible plan that the whole of the rugby league community in London can get behind and buy into.

"Once we find that then I think the game has a chance to go from strength to strength.

"It's not any one person's problem. It's our problem.

"We will try and work with all of the key decision-makers within London rugby league and its environs to come up with a strategy that works."

Rugby league was played professional in London in the 1930s, but the sport returned to the capital in 1980 when Fulham FC chairman Ernie Clay announced the formation of Fulham Rugby League Club.

Since then, London's rugby league club has gone through four separate guises and played at a number of different sports venues in and around the capital.

The franchise have finished in the bottom four in the table in each season since 2007 and the Broncos only secured their first victory of 2013 against Salford Reds last Friday, in what was their fifth game of the campaign.

Broncos head coach Tony Rea said last year that, in time, the club could become the biggest in Super League and Wood says the RFL are committed to continuing to help the Broncos in their development.

"Clearly they have got their challenges as a club at the moment and I know that [owner] David Hughes, [chief executive] Gus Mackay and Tony will be working as hard as they can," he said.

"We have worked closely with the club in the past and we need to continue to do that.

"There is a lot of rugby league played around London and we need a Super League club to sit on the top of that.

It is almost inconceivable to consider yourself a national sport without having a strong presence in the capital. It is extremely important that we 'do London' and 'do London' well in terms of rugby league

"But that is not a licence to occupy a place in Super League indefinitely.

"There are standards that have to be maintained.

"On-field success is one of those, as are other issues such as making sure there is a decent attendance so that everybody who engages with the club has a positive impression.

"It is important that the Broncos could be credible, competitive and be contenders.

"Most people would settle for that and an understanding they are making progress off the field with attendances and revenues that go with it.

"The development side and the production of young talent has made remarkable strides over the last decade.

"People judge the progress the club will make with what happens on the field with the first team. That's where we need to see some improvement if we can.

"We'll help David as much as we can."

The club, who were renamed London Broncos last year, have played at the Twickenham Stoop since 2006 following their affiliation with rugby union side Harlequins.

Their average league attendances have dropped in the last four seasons and the Broncos face a dilemma over where their long-term future lies.

In the years since their formation in Fulham in 1980, London's side have staged their home games at a plethora of venues across the city, including Craven Cottage, Crystal Palace Sports Centre, The Valley, Griffin Park and the Twickenham Stoop, as well as staging one-off games further afield.

The Broncos are looking to move ground ahead of next season, having decided against renewing their ground-share with rugby union side Harlequins.

Wood says it is up to the owners to decide where to base the club.

"The Broncos had have a concern over where they should be located in the capital," Wood said.

"We need to make sense of that and within the club they need to work out where their location is best served.

"There are pockets of activity in east London, some in the north and some out in Feltham where they train.

"The club is privately-owned and ultimately they are responsible for the destiny and direction of the club.

"The League will seek to assist and support and, where possible, provide counsel and advice.

"But at the end of the day we have to stop short of being the people that make the decisions as we are just a governing body."

While the Broncos have fostered dual-registration ties with London Skolars and Hemel Stags, Wood says it is also the RFL's responsibility to aid and encourage new clubs further down the leagues.

Along with the Stags, Oxford and University of Gloucestershire All Golds are additions to the third tier Championship One this season and all three played their first competitive games at the weekend.

"Fundamentally as a governing body, we have got an obligation to invigilate the rules and adjudicate between the clubs on an impartial basis," Wood said.

"That is our first and foremost requirement.

"Rugby league has always, because of its dependency on certain geographical areas, stepped out of that straitjacket.

"We have said what more can we do to support the clubs that don't have the benefit of 100 years' worth of flourishing community game and or close neighbours who they can trade players with.

"We have tried over the last decade to work with clubs - as we have in London and Wales and as we will do so with Hemel, Oxford and Gloucester - to understand that they have slightly different challenges.

"It also presents fantastic opportunities. When you have a professional club in a new area they are frankly the only employment opportunity for certain players.

"We try and work with those clubs without over-stepping our mark of impartiality."