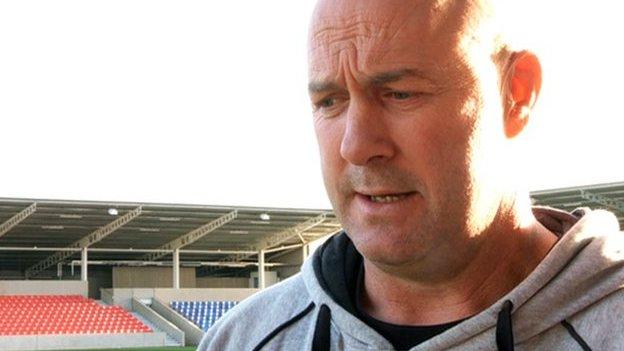 His dismissal comes after Friday's 38-4 defeat by London Broncos - their fourth loss in five games.

After the match, that "things have to change and changes will be made".

Reds CEO Ed Farish said: "Results speak for themselves and it was felt a change must be made to allow our progression to continue on the field and off it."

Salford began the season with a 42-0 home defeat by Wigan, before further defeats by Catalan Dragons and Leeds.

The losing streak was ended with a stunning second-half comeback in a 38-34 victory over Hull KR, but Friday's loss saw them replace Broncos at the bottom of the table.

Head of youth development Alan Hunte will take over the coaching duties at Salford in the interim.

"We thank Phil for his efforts during an extremely difficult close season and wish him all the best for the future," continued Farish.

"We have had to look at the whole business and what is right for the club.

"In the last month we have undergone major changes with the departures of director of football Steve Simms and commercial director Tina Wilkinson."

The 48-year-old Australian spent time on Wigan's coaching staff before joining Salford in 2011.

Veivers had a spell in caretaker charge of Salford that year when Shaun McRae was ill and was promoted from assistant in November 2011.