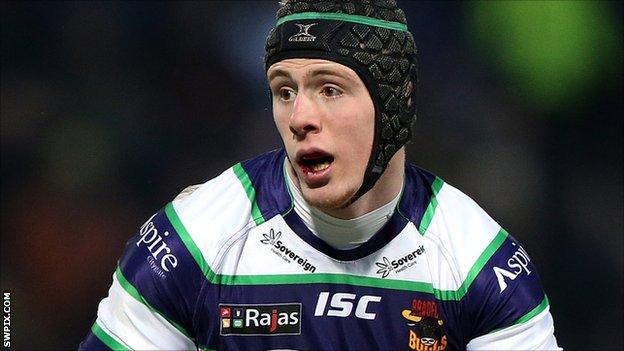 The 19-year-old came into the squad of 17 when Matt Diskin withdrew before the game, and scored his first Bulls try after replacing Heath L'Estrange.

"He got the call Saturday, so he's done really well. He worked hard in defence and gave us a good kicking game."

Cummins continued: "He's a left footer which messes around with their back three and the way they read our plays."

Only Hull KR and Wigan have scored more points than Bradford in the first five games.

Warriors have run in 27 tries, Rovers have 26, while Catalans and Bulls are tied on 24.

Full-back Brett Kearney has scored seven tries, with Sammut close behind on five.

The Halifax-born 'nine' has impressed this season for Dewsbury Rams, scoring two tries in four games for the Championship side for whom he plays under dual registration, but had previously been unable to break into the squad at Odsal.

"It's a really difficult one with Adam," Cummins said.

"I've been having to tell him over the last few weeks that he's playing well for Dewsbury and good enough to play in Super League, but he's had Heath L'Estrange and Matt Diskin just ahead of him.

"I'm more than happy he was able to score."

Bradford's victory ended the Giants' unbeaten run in Super League, with Jarrod Sammut's hat-trick taking the former Crusaders half-back to five tries for the season, following a brace in the opening weekend win against Wakefield.

"When he runs with the ball he's really dangerous, he struck to what we're doing but also played his own game," Cummins added.

"He's in a good vein of form at the moment and we need him to be.