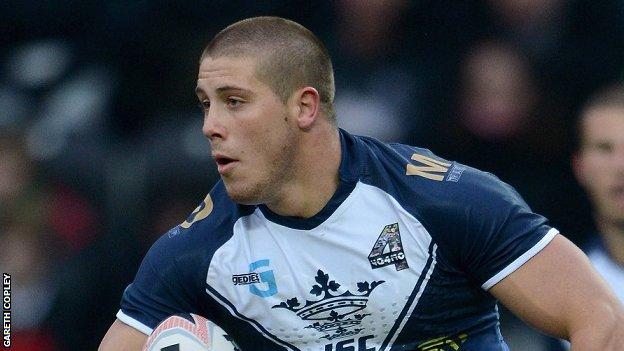 Under pressure Hull FC responded to their early-season critics with victory over error-prone Castleford.

Second-half scores from Arundel and Lineham followed, before fighting resulted in Hull's Danny Tickle and Tigers' Weller Hauraki being sent off.

Hull took an early lead when the Castleford backs allowed a Daniel Holdsworth high bomb to bounce and Horne was on hand to cross in the right corner.

Horne's short pass put Arundel through a gap and over the line immediately after the break, and Lineham then took advantage of a fortunate rebound to make it a personal hat-trick.

Fighting broke out after a bad tackle by Hauraki, with Tickle, Chase, Carney and Mark O'Meley among the most serious offenders.

Tickle and Hauraki were sent off by referee Steve Ganson, with Carney fortunate to be only sent to the sin-bin with O'Meley.

With both sides down to 11, Arundel joined Lineham in scoring a personal hat-trick before Danny Houghton and prop Josh Bowden brought up the half-century of points.

"I don't think it mattered which 17 I picked this week, we were always going to get a result.

"It was probably our best performance of the season. Defensively we were aggressive, we were confident in each other and there was a lot of line speed.

"It was a real team performance and that's what we're after.

"The really pleasing thing was keeping them to nil. We've copped a lot of flak and deservedly so, but the character in the squad is undoubted."

"It wasn't a great start and we were down 22-0 at half-time from high kicks and an intercept. Obviously in the second half we capitulated.

"We need to just put that one to bed. Every try for them was off an error by us, but we should have done better in the second half to regroup from that.

"I felt sorry for Weller. He [Tickle] has hit him twice. What is he supposed to do, just stand there and get a broken nose and a broken cheekbone? I don't understand that one, the interpretations are interesting and that's for both sides."