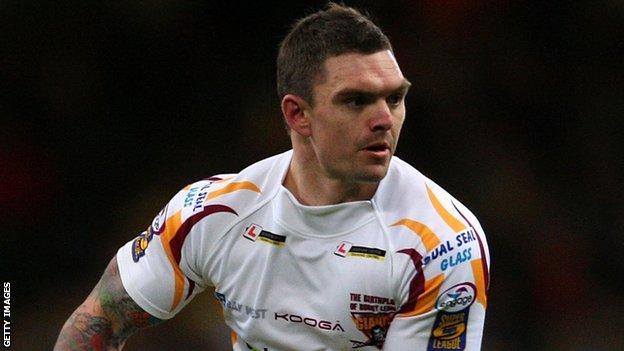 A scrappy first half full of errors from both sides was lit up by two terrific Brough kicks to set up tries for Joe Wardle and Aaron Murphy.

Kevin Sinfield's penalty closed the gap to 8-2 on the stroke of half-time.

Murphy, Brough, Scott Grix and Eorl Crabtree scored second-half tries for the Giants, with Paul McShane going over for Leeds as a consolation.

The Giants, who picked up their fifth win of the season, stay a point clear of second-placed Wigan, who comprehensively

After a cagey opening with both sides dropping the ball on numerous occasions in the wet conditions, the visitors took the lead after a fantastic left-footed chip by Brough created the opening.

Joe Vickery knocked the ball on in the chase and Wardle scored the game's first try, before Brough's conversion attempt hit the upright.

The match continued in scrappy fashion but Murphy ran-in the Giants second try after Brough showed his class again with a terrific kick-through, although he again missed the kick at goal.

Sinfield's penalty on the stroke of half-time closed the gap to six points.

Murphy pounced for his second try four minutes after the break after Brough kicked into space, who then landed a penalty awarded for a high tackle.

Brough put over his first successful conversion when Grix scored Huddersfield's fourth try, and then converted his own try as the Giants took full control of the game.

But Leeds scored their first try when the Huddersfield defence backed off and McShane took full advantage to dummy his way over, with Sinfield adding the penalty.

Crabtree's jinking run saw him score his first try of the season to complete the victory, while Brough's successful kick took his personal tally for the night to 12 points and a match-winning performance.

"I thought we would be up for this game. We knew it was going to be a big game.

"Huddersfield have won here for the last three seasons and this fixture next year will be even bigger.

"They handled the conditions far better than we did and Danny Brough's kicking game was key.

"I thought we didn't play well but Huddersfield didn't let us play well. We weren't out-muscled but we were out-kicked and at crucial times out-played."

"Obviously the result was pleasing but the real positive thing was that I asked for response from last week got it.

"Our attitude was good.

"We came up with one error on our line that let them in for a try and the bloke responsible for that came up to me distraught because he thinks he's let everybody down."