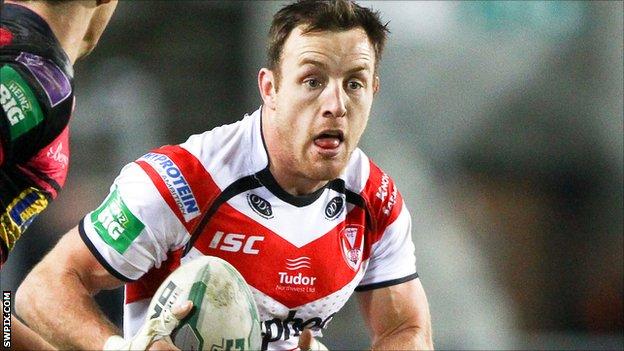 Jordan Turner, Lance Hohaia and Francis Meli all crossed within the first 23 minutes to stun the hosts, who replied through Chris Bridge before the hooter.

Jonny Lomax's penalty and a try from James Roby extended the Saints lead after the break.

Bridge's second score was a consolation in an improved second-half showing.

Tony Smith's Wolves lost their unbeaten record last week in a surprise defeat by Hull KR and, despite welcoming back key players Michael and Joel Monaghan, failed to return to winning ways against a rampant Saints.

The visitors have had a hoodoo on Warrington since the inception of Super League, with 37 wins from 45 meetings in the summer era, and a trio of early tries set them up to continue that streak.

Just six minutes had passed when Turner took a short ball from Jonny Lomax to go over as reward for early momentum, and the returning half-back Hohaia stepped through under pressure to add to the score before the quarter of an hour mark.

Fluid hands from the influential Roby, Tony Puletua and Jon Wilkin fed Lomax, and he looped wide to Meli who steamed through Ratchford to add to Warrington's woes.

Lomax's kicking had seen him land just one of the conversions, and the Wolves were able to claw back into the game late on when Bridge got his first try in his first start of 2013.

Bridge's intervention at the other end of the field denied Joe Greenwood a try in the second period, although Warrington were much improved and looked to cause Saints problems.

That pressure was enough to prompt Lomax to kick for goal when Saints were given a penalty 30 yards out, which he converted, and when Anthony Laffranchi forced Chris Hill to spill, Roby was on hand to collect and run in under the posts for a fine score.

Bridge scored his second of the match to offer a glimmer of hope to the hosts, but Saints held out to record their third victory of the campaign and consign the home side to two defeats in a row for the first time in two years.

"I don't know if we lost it but I think a lot of damage was done in the first 20 minutes. We made way too many errors - some forced, but some unforced.

"Saints were terrific in their defence and that rattled us at times instead of having some patience and sticking with it.

"After that I thought it was evenly matched throughout the game. It was a fantastic game but we had to try to catch up and we weren't quite good enough to do that."

"It was definitely our best performance so far. The opposition are a very good team led by a very experienced coach. To come here and beat them you need to play to a decent level and our start was pretty good.

"In the second half they fought back, as you would expect, and it was a tough game. They are tough players and to beat them is pleasing.

"We have changed our halves so many times already through injury and people have got to understand the team is still learning.