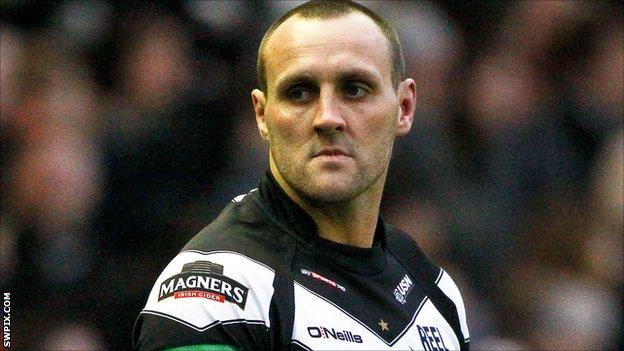 Widnes Vikings overcame the dismissal of second row Gareth Hock to seal a draw at home to Bradford Bulls.

Patrick Ah Van's late penalty sealed the draw after Vikings bounced back from 20-4 down at the break.

Hock was sent off in the first half which Bradford led 20-4 thanks to tries from Elliott Whitehead, Brett Kearney, Matt Diskin and Keith Lulia.

However, it was the kicking of Jarrod Sammut and Ah Van that ensured honours even, with both players missing two conversions from four.

Denis Betts' Vikings were missing skipper Kevin Brown through an ankle injury, while the experienced Cameron Phelps and long-term absentee Stefan Marsh were also ruled out.

Betts welcomed back Willie Isa, Dave Allen and Phil Joseph - against his old club - to the squad, with Chris Dean capping his new deal at the club with a place in the centre.

Bulls loose forward Jamie Langley, a survivor of the glory days at Odsal, made his 250th career appearance, although Francis Cummins was without goalkicking winger Jamie Foster.

Whitehead gave Bradford a flying start with the opening try from Brett Kearney's pass after only two minutes, and the visitors extended the lead when the league's leading scorer Kearney raced onto Keith Lulia's clever off load to force his way over.

The Vikings finally opened their account when Ah Van nipped in from dummy half against his old club to cut the gap to 10-4.

Scrambling defence stopped Ah Van from adding to his second before substitute Diskin burrowed his way over from dummy half - and Hock saw red for dissent in the aftermath.

The numerical advantage paid off with Lulia taking Sammut's pass to cross and make it 20-4 at the break.

Cummins' side were dealt a dual blow, losing Matty Blythe after a first-half knock, followed by a second Widnes try when Hanbury crossed from Lloyd White's pass.

That lead was cut even further when Ah Van squeezed in at the corner and booted the conversion off the touchline, although a Sammut penalty gave Bradford an eight-point cushion.

Undaunted, Widnes kept up their pressure and were rewarded when White took Hanbury's pass to touch down, and then Ah Van struck the penalty to pull level.

Hanbury looked to sneak the victory for the hosts late on, but his drop goal failed to land as the points were shared.

"It was an epic second half and a great performance of endeavour and enthusiasm. We could not get a grip on the game at first but got stronger and had great self-belief.

"We fought as hard as we could and even had opportunities to win it."

"You can't play without the ball and we couldn't put any pressure on Widnes in the second half.

"We had a few guys busted and the penalty count was surprising - but no excuses.

"I cannot fault my players for their effort but it was an awakening after Sunday's good result over Huddersfield."