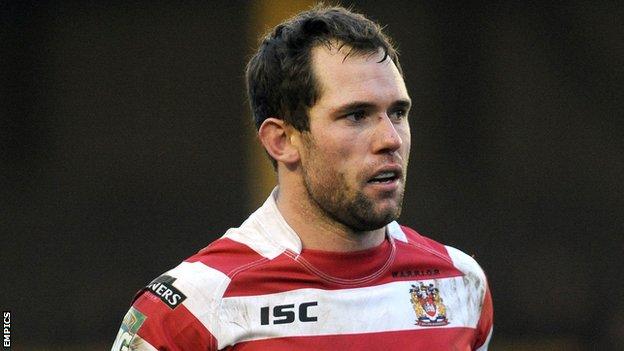 Wigan kept up the pressure on Huddersfield at the top of the Super League table with a seven-try victory over Catalan Dragons.

Winger Pat Richards crossed twice and kicked five goals in his 200th appearance for the Warriors.

Blake Green, Chris Tuson and Jack Hughes crossed in the first half for the home team.

It was a professional performance. What makes me feel good is that I know we can improve. We can get better in attack, we all know that

Richards' brace and tries by Sam Tomkins and Greg Burke in the second period ensured a one-sided scoreline.

The first half was a battle before Wigan finally opened the scoring when Tomkins' kick-through bounced into the hands of Tuson, who offloaded for Matty Smith to send his half-back partner Green over.

Wigan crossed for the second try when Tuson steamed onto a ball from O'Loughlin, and a third followed as Tomkins' initial kick was spilled by Daryl Millard and O'Loughlin swooped on the ball before passing off the floor for his centre Hughes to stroll over.

The hosts needed just three minutes of the second half to register their fourth try when a wayward ball from Millard was intercepted by Richards who raced 95 metres to score.

The game ended as a contest on 51 minutes when Tomkins crossed in the corner and moments later Richards collected a fine kick from Green to get his second try.

In the final 10 minutes, Eloi Pelissier looked to have put a fair hit on Tomkins but the Wigan full-back's team-mates disagreed and a melee followed. Referee Phil Bentham subsequently showed Olivier Elima a yellow card.

Wigan's fine performance was capped in the final three minutes when youngster Burke went over in the corner for his first Super League try.

"I would take the nil every day. I was pleased with our defence. Catalan are a good team and very skilful, but our defence for the majority of the game was good.

"It was a professional performance. What makes me feel good is that I know we can improve. We can get better in attack, we all know that.

"For Paddy [Richards] to get 200 games is a marvellous achievement. We all like Paddy, he is just like a Wiganer and we wanted to do well for him.

"I have been at this club since I was 15 and seen some top Australians, and he is honestly up there with the top three I have played with and coached."

"It was just not our night. I don't think there is actually 38 points difference between the two sides but tonight there was and we didn't deserve anything.

"The first half was quite tight but they scored a lucky try through a kick and they went on from that. Wigan were patient all night, they started to build some pressure and we were unable to absorb it.

"Thomas Bosc will probably have a scan on Monday, we are still unsure whether it is his leg, ankle or knee, Vincent Duport has injured his back and he should also have a scan. We have a lot of bruised bodies."