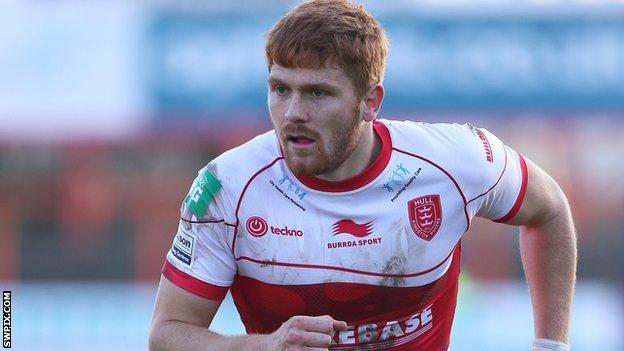 Hull KR held off a fightback from struggling London Broncos to pick up their third win of the season.

The Robins made light work of the hosts in the first half with Alex Brown (3), Kris Welham (2) and Greg Eden crossing and Craig Gower responding for London.

Kieran Dixon and Chris Bailey gave the Broncos some hope with tries shortly after the restart.

But Liam Salter and Cory Paterson touched down to secure the win before Dan Sarginson's consolation.

Craig Sandercock's side were coming into the game off the back of an impressive win against Warrington last week while the Broncos had secured their first victory of the season at Salford.

"We had an inability to build pressure in the first half. We made too many mistakes and that held us back

The visitors drew first blood when Welham capitalised on poor defence to touch down after Michael Dobson's kick.

Brown showed great power and pace to run away from his own half for Hull KR's second, before Gower got the hosts on the board from Ben Fisher's pass.

Michael Witt converted but moments later his poor pass was intercepted by Welham and he ran in from halfway, Dobson scoring his first of five goals from the conversion.

Brown stormed down the touchline and Eden crashed over following a good pass from Travis Burns, before Brown got his hat-trickafter good attacking play from the Robins to leave the half-time score at 6-30.

The Broncos came out strongly in the second half and they eventually made their pressure tell when Dixon went over and Bailey got their third try of the day after bad defending from Brown.

Dobson settled any jitters with a penalty and Salter and Paterson both crossed the whitewash to secure victory.

Tony Rea's side had the final say when Gower played in Sarginson but they have now lost five of their six games this season.

Broncos coach Tony Rea said: "We had an inability to build pressure in the first half. We made too many mistakes and that held us back.

"I thought we were in with a shout in the second half, but it was not to be.

"We just need a home win - the players need it and the fans need it.

"We have to pull together and stay strong."

Hull KR coach Craig Sandercock said: "Naturally, I am pleased with the result. There was a bit of a lack of concentration in the second half, but we corrected that.

"Back-to-back wins builds confidence, and we can work on this."