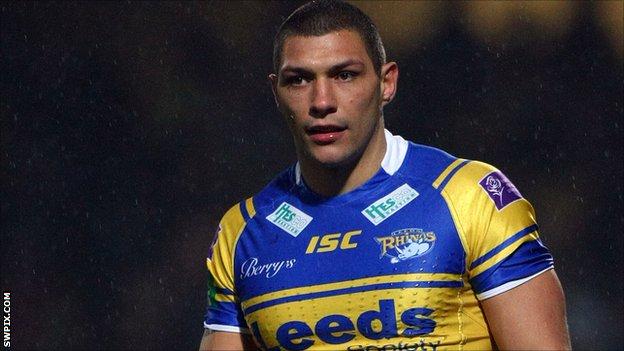 Leeds edged an intense encounter with Wigan at Headingley to mark a first regular season victory in this fixture for Rhinos coach Brian McDermott.

Wigan led at half-time, through a Matty Smith penalty, after Liam Farrell's converted try had cancelled out Ryan Hall's early score for the home side.

Joel Moon and Jamie Jones-Buchanan tries put Leeds ahead after the break, both also converted by Kevin Sinfield.

This meeting of last season's champions against minor premiers was earmarked as one of the games to watch and, while it was never expansive, the effort, intensity and physicality was high throughout.

Wigan, without the influential Sam Tomkins, were forced to reshuffle in the back division prior to kick off.

However, unlike last season's play-off defeat by the hosts, which the England full-back also missed, the experienced Pat Richards deputised, with Darrell Goulding in at centre and Thornley moved to the wing.

Rhinos had named Ryan Bailey in the squad to add ballast to the pack, and the second-rower was heavily involved in an attritional first 10 minutes leading up to the game's first score.

It went Leeds' way, created by Danny McGuire's feint which opened the gap on the left and the supporting Hall took in his short-side ball and stepped the covering defence to put Leeds ahead.

The hosts, buoyed by that score, were causing problems but were made to pay for failing to convert chances when Farrell latched onto a subtle inside ball from Smith to draw Wigan back into the match.

Having held up Hall over the line thanks to Josh Charnley's intervention, Wigan went in two points up at the break when Smith kicked a penalty after Jones-Buchanan was penalised for a high shot.

McDermott's side, beaten in their last four league meetings against the Cherry and Whites on home turf, responded swiftly as Moon touched down after Sinfield's chip kick was fumbled by Wigan winger Charnley.

Jones-Buchanan then made up for his first-period indiscipline with the Rhinos' third try when he slipped a string of tackles to score after Peacock's pass bounced kindly into his path.

Further sloppy passing when well placed to add to their tally almost cost the Rhinos, notably when Thornley capped off a flowing right-to-left move to reduce the deficit, but they hung on to bounce back from last week's home defeat by Huddersfield.

For Wigan the opportunity to record a fourth straight win was lost, as was the chance to go top, in a second defeat of the campaign.

"We weren't great last week but tonight we showed a lot of resilience and a lot of grit.

"I didn't think we were great with the ball, although we had two clear-cut chances for tries and bombed them.

"We've a smile on our faces but it was a frustrating win. Defensively, I thought we were strong and credit goes to Wigan too. Both teams defended each other out of the game.

"I've got to mention Brett Delaney for the way puts himself about. If we could put 13 Brett Delaneys on the field, we wouldn't lose many games, because he runs his blood to water."

"I lost my dad on Wednesday, which is sad. I needed a distraction and wanted to get back in work as soon as I could.

"It was a poor finish to the week. I was proud of our effort but individual errors cost us. Leeds are a great team and you can't turn up here with ordinary errors like we did.

"It was a late change with Sam Tomkins and a few people played busted. I still believe we had a team that could come here and win but you have to commend Leeds. They can grind out wins, they've done it to us so many times.

"They were better than us in major parts of the game. We were not consistent in our attack. At times we lacked a bit of composure but we'll bounce back."