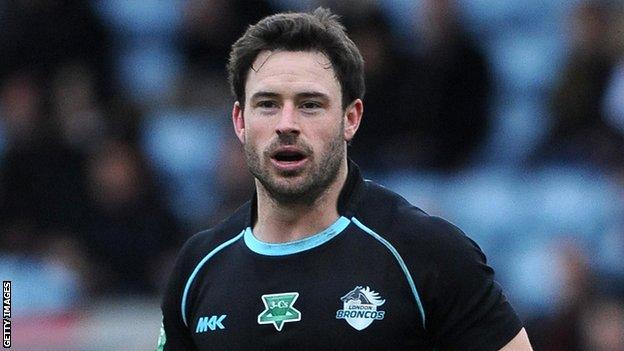 Castleford had led 12-6 at the break through converted tries from Kirk Dixon and Craig Huby, with Chris Bailey crossing over for the Broncos.

Three tries in nine second-half minutes from Michael Robertson, Craig Gower and a second from Bailey handed control to the visitors.

Victory at the Probiz Coliseum lifts the Broncos off the foot of the table.

The Tigers were without suspended Justin Carney and Weller Hauraki but welcomed back Lee Gilmour and Jake Webster from injury.

Winger Richard Owen and substitute prop Jonny Walker were both recalled to Castleford's team and Dan Fleming made his Super League debut from the bench.

Heavy rain and sleet before kick-off led to muddy conditions, but Castleford took the lead on 12 minutes when a kick from Jordan Tansey went behind the advancing Broncos defence, with winger Dixon picking up the ball to cross over in the corner for a score which Ellis converted.

The Broncos levelled on 26 minutes following a period of sustained pressure.

A kick from half-back Gower was not dealt with by Castleford scrum-half Jamie Ellis and Bailey pounced upon the loose ball to score, with Witt adding the extras.

The home side re-established their six-point lead seven minutes before the break when Huby, who had three defenders tracking him, managed to shrug off the tacklers and force his way over the line.

Broncos came close to levelling the scores just before half-time but a Shane Rodney knock-on helped Castleford to hold firm.

London Broncos seized control of the game after the break with three converted tries in the space of nine minutes.

Broncos levelled the score when Tony Clubb drove forward and fed Robertson, who juggled the ball but managed to touch down under the posts.

Shortly after Castleford were penalised for holding down, Gower dummied and dived between two defenders to put the London side in front for the first time in the game.

Then another kick from Gower caught Castleford off guard and Bailey gathered to score. All three tries were converted by Witt for a 24-12 lead.

Luke Dorn came on for his 150th appearance for the Broncos as their defence resisted late pressure from Castleford.

With less than 10 minutes remaining Witt added a penalty, awarded for crossing, to complete a flawless kicking display and inflict a third successive defeat on the Tigers.

"It's been a really good day for us in difficult conditions and away from home. We were looking for some confidence and it was a reward for everybody staying tight.

"We wanted to make sure we were competing in every play. We had to take the game at them a bit as it was wet.

"We had spoken about how it was an important period after half-time to go and re-stamp our imprint on the game.

"I'll have to give Tommy Lee a compliment for a quality 80 minutes as a number 9 then at 13 in the middle of a wet game, but everyone did their bit."

"We were the best team in the first half and really good value for a 12-6 half-time lead. We conceded only one try and that was from a dropped ball but London were the better side in the second period.

"We just didn't have the same continuity. The second half was no reflection on what we've been doing during the year or what we can do.

"I thought the second half was really poor. I think it was mentally not being tough enough."