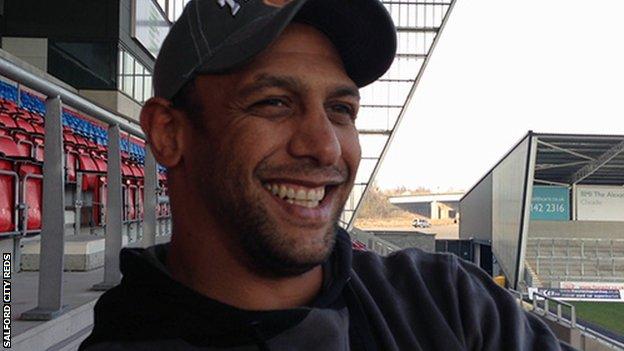 Salford temporary head coach Alan Hunte has revealed he would like to take the job on a permanent basis.

The 42-year-old has been in charge since Phil Veivers' departure and led the Reds to a much improved performance in the 23-23 draw with Wakefield.

Asked by BBC Radio Manchester if he wanted to lead the Salford City Stadium side, he said: "Of course, who doesn't want to be a Super League head coach?

"I've still yet to find something that I'd rather do more."

He's such a positive guy, but he demands success, and I want to be part of that

The former St Helens, Hull and Warrington centre finished his career with the Reds and was the head of youth development before being asked to take charge of first-team affairs.

Former Great Britain coach Brian Noble is also rumoured to be a target but the club have said Hunte will remain in place for another week at least.

"If I was to keep the job it means that the team is going in the right direction and with the new owner that can only be a good thing," he added.

"He's such a positive guy, but he demands success, and I want to be part of that success especially having been at the club for so long and seen the ups and downs.

"The last six months have really been tough, hopefully the next couple of months can see the tide turn and us become a real force in rugby league."