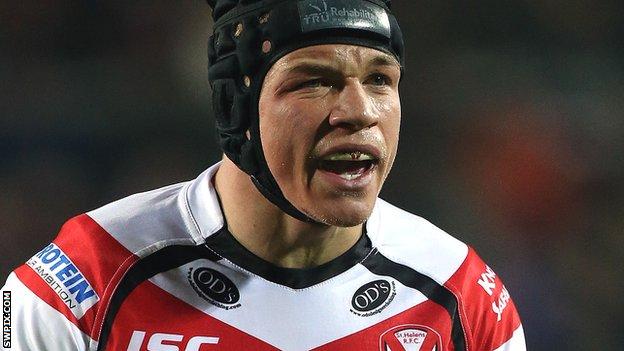 Jonny Lomax is pleased with the impact he has made at full-back for St Helens, saying the positional change has allowed him to play with more freedom.

"I'm enjoying it there," the 22-year-old told BBC Radio Merseyside.

"I've got that bit more freedom and I probably play off the cuff a bit more in that position."

Only Bradford's Brett Kearney (nine) and Wakefield's Ben Cockayne (eight) have crossed the line more times than Lomax in 2013.

Versatile Lomax, who has spent most of his Saints career at half-back, took his tally of tries this season to seven with a second hat-trick of the 2013 campaign against Wakefield at Langtree Park.

He also ran in three tries in a on 23 February.

"You can play like a half-back from full-back these days," added Lomax. "Brett Hodgson at Warrington and Sam Tomkins at Wigan are doing exactly that.

"One of the things I've found, and what probably goes unnoticed, is how much running you do behind the line. You've got to be there in that position but you're doing the running to cover."

"It's good getting all the positives I'm getting now but there are going to be negatives as well and I've got to be able to ride them out. My aim is to keep trying to improve."