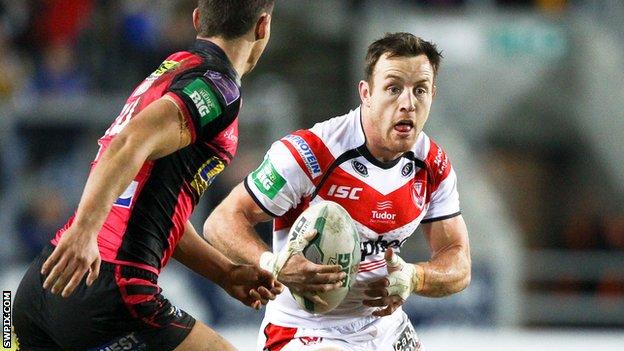 St Helens coach Nathan Brown has confirmed that England hooker James Roby will be out of action for "an extended period" with an ankle injury.

Roby, 27, was forced off during

"It is more than likely he will be out for a month and maybe as long as 10 weeks," Brown told the club website.

But there is more positive injury news for captain Paul Wellens and forward Tony Puletua, who may return for Friday's Super League game at Salford.

Roby, who won the Man of Steel award in 2007 and was nominated again at the end of last season, has been an extremely influential figure for Saints in recent years.

England coach Steve McNamara, who ahead of this year's World Cup earlier this month,

Brown continued: "It is definitely something we didn't want to happen but we will move on, move someone in there and that will give them the opportunity to do well for the team. I'm sure they will.

"We will look at the best options and see how we go later in the week. I wouldn't want to move our half-backs around but maybe that is the best option."