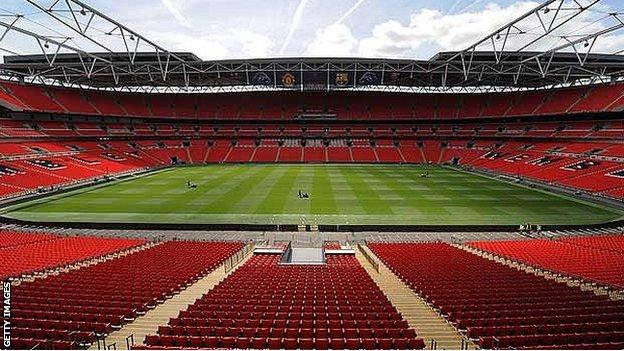 Wood has identified the combination of international rugby league and the iconic stadium as a unique opportunity.

He told BBC London 94.9: "Nothing cuts through like international rugby league - we need to show the world at large that rugby league is alive and well.

"The only way to do that is to have Wembley as close to full as possible."

People talk about Wigan and Saints, Leeds and Bradford. Going forward it might be Oxford and Hemel or the Skolars and Broncos - the Wembley games are crucial to this

Wood has recently expressed his frustration that Super League still does not have a strong team based in London.

London Broncos (known as Harlequins RL between 2006 and 2011) have been in Super League since its inception in 1996 but have never won a major trophy.

In recent years, the league has looked to expand into new regions via the addition of Perpignan-based Catalans Dragons and Welsh side Crusaders, but the latter withdrew from Super League in late 2010.

"We can all get excited about club rugby league in this country," he continued.

"People talk about Wigan and Saints, Leeds and Bradford, Hull and Hull KR, even Workington and Whitehaven.

"Who knows, going forward it might be Oxford and Hemel Stags at a stretch or the [London] Skolars and Broncos.

"The semi-final double-header at Wembley is absolutely crucial to this possibility as it's a wonderful facility that drags people to it just because of where it is."

The Rugby League World Cup begins in October this year with the final being held at Old Trafford on 30 November.