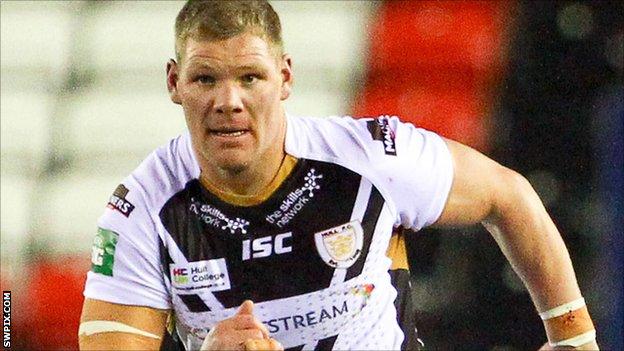 Danny Tickle's late conversion earned Hull FC a share of the points against London Broncos in tricky playing conditions at The Stoop.

London were leading by 12 points midway through the second half after tries from Tommy Lee, Kieran Dixon and Matt Cook, plus three Michael Witt goals.

But Joe Westerman added to Ben Galea's first half try to bring Hull to within six points with 14 minutes to play.

And Richard Horne crossed late on, with Tickle landing the goal to level.

Broncos coach Tony Rea will have been disappointed by his side's second-half collapse and the missed opportunity to pull themselves four points clear of the foot of the table.

For Hull coach Peter Gentle the draw avoided a fifth defeat of the campaign, half the total of losses his side suffered during 2012.

The big talking point pre-match was an unfamiliar full-back role for England wing Tom Briscoe and he struggled to impose himself on a miserable afternoon for early spring.

Despite a deluge of rain and snow, the Twickenham Stoop pitch held up enough for referee Robert Hicks to deem it playable.

The tricky conditions made handling difficult, although it was a penalty for a challenge off the ball rather than a knock-on that led to the game's opening try.

Aaron Heremaia was spoken to for a late hit which gave the Broncos field position and, after a succession of Hull scrambles, Lee eventually caught the visitors off-guard to steal in from dummy-half with Witt converting.

Skipper Galea found himself in the right place to bring the Airlie Birds back into the game when a kick through brushed off Michael Robertson and fell into his path five yards out, and Tickle landed the conversion from a tight angle.

However England Knights wing Dixon capped a pleasing half for Rea's side with a fine solo effort, burning off Briscoe to add four to the tally and give Broncos the lead at the break.

I'm only disappointed because Hull scored a last minute try, and it's then that you start feeling like we should have won. It was a contest from start to finish with both teams fighting all the way

I'm only disappointed because Hull scored a last minute try, and it's then that you start feeling like we should have won. It was a contest from start to finish with both teams fighting all the way

Broncos extended their lead through Witt's penalty 10 minutes into the second period to reignite the game after a scrappy spell, and the cushion was extended with a third try soon after.

Cook picked a gap with a line break, leaving full-back Briscoe helpless on his way to the whitewash and Witt again swung the boot to give Hull a two-try deficit to overcome.

Shane Rodney's knock-on gave Hull a penalty 20 metres from the line and they capitalised as Westerman bulldozed his way over following graft by Mark O'Meley and Andy Lynch.

Tickle pushed over the kick and, inspired by Danny Houghton, Hull launched a late fightback to pick up a point.

Horne finished off in the corner and Tickle retained his composure to slot over to earn a well-deserved draw.

"It's hard to say we're happy with a point. It doesn't feel like a win, having been in front for a large part of the game. Having said that, we left nothing out there and the spirit of the team along with the enthusiasm and the effort was everything you want to see.

"I'm only disappointed because Hull scored a last minute try, and it's then that you start feeling like we should have won. It was a contest from start to finish with both teams fighting all the way.

"We were untidy in bits, and they were untidy in bits. It was just the back-end of the match that didn't go our way. We didn't have Craig Gower as he had a groin issue from last week. If he was fit he would have played, but he should be back for our Easter games."

"We're still, for some reason, playing very conservatively. We're not doing a lot of things which we work on during the week. It wasn't until we started to chase points that we threw the ball around, started getting some shape and grew in confidence.

"I don't know whether it's a lack of self-belief, or just trying to hang in with sides at the moment but we've got to get to the bottom of it. It took us a long time to warm into the game. It was just horrible conditions, and a horrible game really.

"A draw is probably a good result. I'm happy with a point. Look, these conditions are horrendous to play in so we'll take the point. We've got a few players missing but we'll make do over the next few weeks."