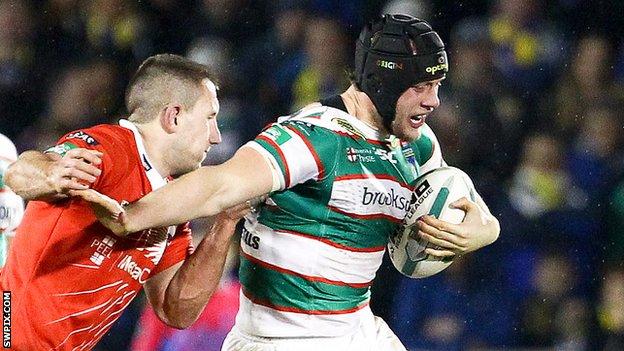 Warrington Wolves prop Chris Hill does not believe he is suffering from "second season syndrome".

Hill went from playing for Leigh in the Championship to the England squad in the space of 12 months.

"I knew that, coming into my second season, I needed to impress [coach] Tony Smith to get my starting place back," he told BBC Radio Merseyside.

In his first year as a professional, Warrington's Chris Hill won the Challenge Cup, appeared in a Super League Grand Final and made his international debut for England

When asked if he felt he was being targeted by opposing teams following he added: "You just have to deal with that and there are different ways of dealing with that. It just makes you a smarter and better player hopefully."

At club level, the 25-year-old won the Challenge Cup in 2012 and appeared in the Wire's Grand Final defeat by Leeds Rhinos at Old Trafford.

that won the Autumn International Series and is hoping to be part of Steve McNamara's squad for the World Cup later this year.

Warrington, who lie fourth in the table after seven matches, face league leaders Huddersfield Giants on Friday and are boosted by the return of experienced forward pair Ben Harrison (hernia) and Trent Waterhouse (back) from injury.

"We've got those lads coming back and [from the forward pack] now," Hill said. "We're getting them back at the right time of the year. We've missed them both."