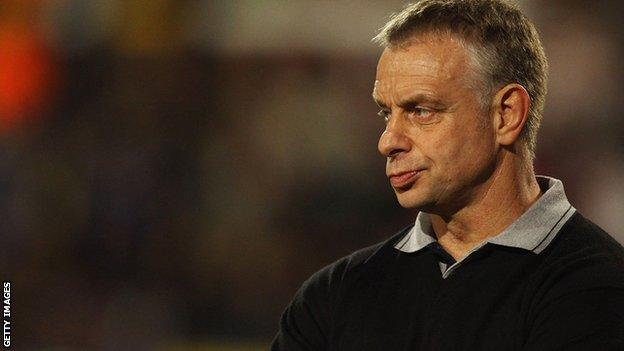 "I am after the best coach I can get my hands on," Koukash said.

"Brian fits that bill and I would be honoured if we could work something out and Brian could become our coach."

This club is a proper sleeping giant and could, if managed properly over next three or four years, become the biggest rugby club in the country

Alan Hunte is currently in temporary charge and has expressed interest in the role.

Noble has not coached since leaving Crusaders at the end of the 2010 season.

"Salford are the nearly team," Noble told BBC Radio 5 live. "They need a vision and with that vision it [success] is achievable.

"They've always been the nearly men but when you look at the cities of Salford and Manchester, it's massively important to the game that we're strong there."

Koukash caused a stir by making a bid for Wigan star Sam Tomkins, and he also moved for veteran Warrington forward Adrian Morley.

"Adrian is an iconic figure of this game and I know I upset a few people when I made an enquiry, but he is the ideal person for us," said Koukash.

"He is a Warrington player, but if he becomes available I`ll be the first person to knock on his door."

Koukash, a Kuwait-born businessman and also a racehorse owner, saved Salford from administration when he bought the club in January and he has ambitious plans.

"This club is a proper sleeping giant and this club could, if managed properly over next three or four years, become the biggest rugby club in the country," he said.

However, he does believe Super League needs to raise its salary cap to allow clubs like Salford to grow, insisting it will not have a detrimental effect on smaller teams and will increase the profile of the game by retaining their big-name players.

In recent years a number of stars have moved to Australia to play in the more lucrative National Rugby League or changed codes to join rugby union sides.

"People say 'it will affect the smaller clubs', but the clubs struggling now are going to struggle regardless of what the salary cap is," he said.

"If we increase it to £2.5m or £3m all of a sudden, teams can start retaining their top players and stop them moving to rugby union and NRL. We could reverse the process and start bringing players back. It will result in more bums on seats."