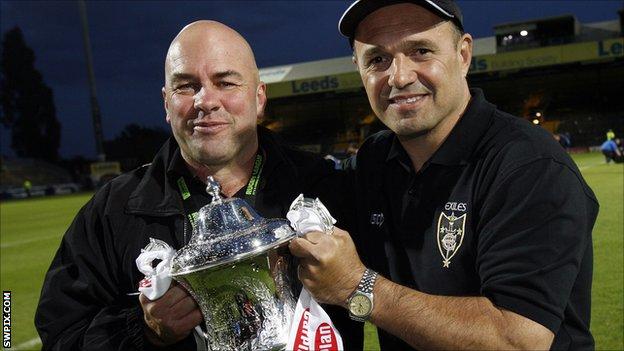 Former New Zealand head coach Brian McClennan has returned to coach the Exiles for the International Origin fixture with England in June.

McClennan, 51, who coached Leeds Rhinos to Grand Final success in 2008 and 2009, led the Exiles to victory in the inaugural fixture in 2011.

England will use the Exiles clash as preparation for the 2013 Rugby League World Cup which takes place in October.

"The Origin game is a fantastic concept," McClennan said.

"With the Rugby League World Cup on the horizon this year's match is going to have more riding on it than before."

Former St Helens head coach Daniel Anderson was in charge for the double header of fixtures in 2012, which was drawn.

The southern hemisphere national teams such as Australia and New Zealand select their sides exclusively from the National Rugby League rather than Super League, so Exiles selection is the closest some come to international recognition.

"It's a hugely important fixture for England as they look towards the World Cup and for all the Kiwi and Aussie boys in Super League it has special meaning," McClennan said.

"Many of them know that they aren't going to be considered for rep footy when they sign for a Super League club and the Exiles gives them that chance.

"I had a great time two years ago, it was a lot of fun for everyone involved with the Exiles and I'm looking forward to replicating the spirit we had in camp in 2011."