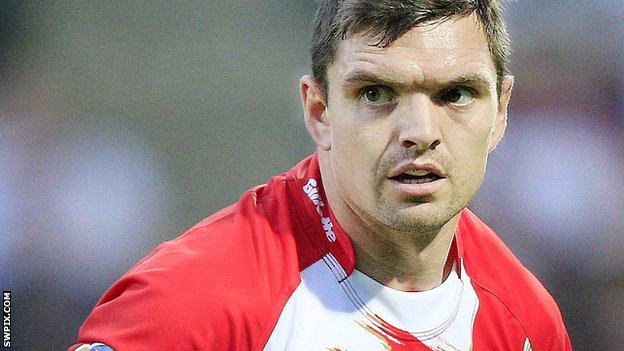 Brough, who skippered Scotland at the 2008 competition, has one England cap.

"If he continues the form that he's in and does that over a sustained period, there's a chance of him coming back," McNamara told BBC North West Sport.

Danny Brough's Scottish ancestry enabled him to captain the Scots at the 2008 World Cup. Brough kicked a late conversion against Fiji to earn Scotland their first ever World Cup victory.

"It's the same for anyone else on the outside. There's more than just Danny caught the eye [in Super League so far this season] and that's the way it should be.

"We've picked a 30-man squad but if we only had 30 players playing well in Super League, we would be in trouble.

"The idea is that you have 50, 60, 100 players all playing well and vying for a spot. Danny's one of those players who is playing really well and is not quite within our group."

Dewsbury-born scrum-half Brough switched his allegiance to England in 2011 but injury prevented him from featuring in that year's Four Nations tournament.

in July last year but at the end of last season.

Meanwhile, McNamara has said that he would be surprised if his final World Cup squad does not contain any players currently plying their trade in the NRL.

There were no Australian-based players involved in England's first training camp of the year last weekend but the likes of Sam Burgess and James Graham are in the run-up to the World Cup, which starts in October.

"We've got a very good monitoring and analysis system in place in Super League and we've managed to apply that to the NRL competition as well," added the former Bradford Bulls coach. "It's given us a really good gauge as to where everybody is situated.

"I'm in constant contact with the group of players that we have in Australia and I will go out and visit them. They'll be kept fully up to speed as we move along.

"There will be players playing in the NRL that will join our group. I would be very surprised if there wasn't."