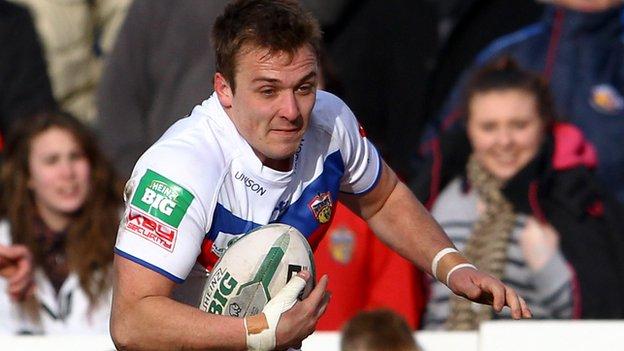 Wakefield won the West Yorkshire derby in confusing circumstances to leave Castleford marooned at the bottom of the Super League table.

Trinity had scored just their sixth try to lead 37-16 when, with seven minutes left, a fire alarm sounded and fans had to evacuate the Princess Street Stand.

With the fire brigade summoned, after a delay of around 10 minutes, referee Ben Thaler blew for full time.

Both coaches Ian Millward and Richard Agar agreed that the result will stand.

Rugby Football League match commissioner Tony Randerson said that the fault appeared to be related to a floodlight and confirmed that both Millward and Agar backed the decision to end the game early.

The fault appeared to be related to a floodlight. It seems the incident was not as serious as first thought but both coaches were in agreement that it was the best course of action."

The result was officially ratified on Saturday by the RFL, who issued a statement reading: "The RFL's independent board of directors has ruled that the result from the Super League round nine fixture, Castleford Tigers 16 Wakefield Trinity Wildcats 37, shall stand.

"The RFL board convened earlier today (Saturday) and decided that the game should be awarded to Wakefield. Both clubs have supported that decision."

After Friday's match Wakefield captain Danny Kirmond was presented on the pitch with the Adam Watene Trophy, competed for annually by the two derby rivals.

Trinity, back in action after a two-week break, following the postponement of their match with champions Leeds last weekend. were cruising at half-time.

They turned round 25-0 up after tries from Tim Smith, Danny Kirmond, Peter Fox and Richie Mathers, while Paul Sykes added four conversions and a drop goal.

Cas then staged a brave fightback to get to 16-25, scoring three tries from Jordan Thompson (2) and Richard Owen.

But winger Fox and Lee Smith, who came off the bench to kick both conversions, closed the door again, sentencing the Tigers to a fifth successive defeat.

Randerson also confirmed that a bottle and a hot drink had been thrown from a section of Castleford fans at Wakefield's former Tigers full-back Mathers after he had scored his 33rd-minute try.

"We think it was handled very well. I felt they won fairly and squarely. Any problems with regard to stadium safety comes first. I was very happy to stop the game.

"There was no way we were going to win the game from there and we haven't taken too much time off the spectators.

"I was extremely disappointed with the first half. We then got back in the game and, when we got those three tries, we were back in it but we came up with more errors. We've got no one-else to blame. We're inflicting punishment on ourselves."

"I think the rule from the RFL is that the result can stand if it goes past 60 minutes but it's at their discretion.

"Myself and Ian spoke on the sideline in consultation with the match officials and everybody's safety is paramount.

"We didn't know how long it was going to be before we could get the game going again so, with seven minutes to go, we felt the sensible thing was to let the result stand, especially with four scores in it at that point."