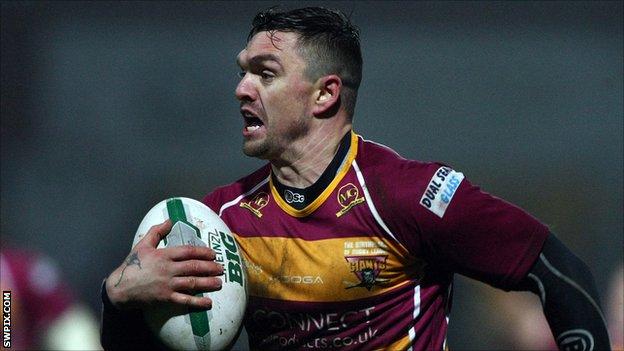 The 30-year-old was influential with ball-in-hand and boot, scored a try and kicked eight goals.

Losses by Warrington and Salford unseated the Giants from the top of the Super League table after six wins in the opening seven games, but they were ruthless in their dismantling of a Widnes side buoyed by derby success against the Wolves on Friday.

Denis Betts opted for youth in his squad, handing starts to Gilmore and Jack Owens and their inexperience told as a strong Giants side came close to a repeat of last season's 66-6 victory.

It took three minutes to open the scoring, when Brough's kick to the corner handed Murphy the first of his treble, and Grix added to the tally soon after following Luke Robinson's clever use of space.

I've got to look at the bigger picture as well, The war's not won this weekend, it's just another battle. I've got to keep my soldiers on their feet. When you see these lads the day after they've played, to turn them around two days later is close to cruelty.

Brough and his half-back partner Robinson were picking holes in the Vikings defence, and the former added his name to the scoresheet when he collected Wardle's pass after an 80-metre break to score.

Lunt's face-pass close to the line let in Lawrence on his return to the side, and Murphy got his second before the break to end the half 26-0 up.

Service was resumed for the Giants minutes into the second half, George's pace taking him well clear of the Widnes defence and, having forced a drop out, Cording collected Brough's pass on his way to the line and added his name to the scoresheet.

Giants were in exhibition mood and some thrilling handling eventually worked in McGillvary to cross before yet another Brough kick pierced the Vikings rearguard to provide Grix with a second which brought up the half century.

Anderson's hopes of a 'nilling' were shattered as Widnes' commitment was rewarded with Mellor's score from Dave Allen's length of the field break, but further scores from Murphy and Lunt from dummy half ensured a very comfortable return to winning ways for the home side.

"You get one day extra from turning around from Sunday to Friday. We've know all along that we'd be playing Friday and Monday at Easter. I've got no complaints about it. You should get on with it. It's an opportunity to rack some points up."

"We turned up to play and played the Giants way. We played tough and got our rewards.

"They've one eye on next week and what they've got coming up. We didn't have the luxury to do that because we're jostling for positions where we want to be come the end of the year."

"If you'd have offered me two points a month ago from Catalan away, Wigan away, Warrington at home and Huddersfield, I would have taken them.

"Easter been a part of my life since I can remember but I think you've got to look at this [two games in four days] and say 'it doesn't work'. You cannot play the game the way it's played now and expect two games on a weekend.