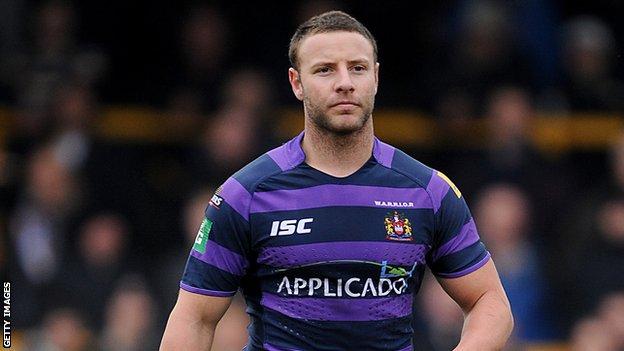 Last year's fixture between the two sides saw the Warriors pull off the greatest comeback in Super League history, recovering from a 26-0 deficit to eventually win 36-42.

Wigan were in no mood to make such hard work of the game this year and Charnley went over on the last tackle inside four minutes.

Green went over for his first shortly afterwards before Sam Tomkins broke away from the Robins defence before passing to Thornley to run in.

It got worse for Craig Sandercock's side when Pat Richards ran on to his own kick in the in-goal area before Hughes broke two tackles to touch down.

Blake crossed for his second to give the visitors a 30-0 lead but Eden got on the end of Craig Hall's kick to get the hosts on the scoreboard just before the break.

Any faint hopes of a comeback were quickly distinguished when Green capitalised on more poor defending to secure his hat-trick.

This was Wigan's biggest win in the Super League era and Hull KR's biggest defeat since they joined the competition.

Smith kicked a 40/20 and from the following play eventually ran in for a simple score after Green's pass.

Tuson got on the end of excellent work from Tomkins before lacklustre defending allowed Smith to go over for his second.

Powell finished off neat play and from the restart Richards's kick found its way to Liam Farrell to run in.

The Robins were being run ragged and Thornley and Tuson touched down for their second scores in quick succession of one another.

2012 Super League Man of Steel Tomkins scored his first and Wigan's last of the day to leave Richards to land his 12th goal.

"The boys will learn a massive lesson in how to play rugby league.

"They named a full strength backline and we knew it would be tough. Everything they did turned to gold.

"Sometimes that happens, when everything goes right.

"I was pleased with our attack but I didn't know this was a record score. It was a great win and we scored some great tries.

"I'm disappointed to concede the six points. I don't mean to sound arrogant but I was gutted we didn't concentrate for their try."