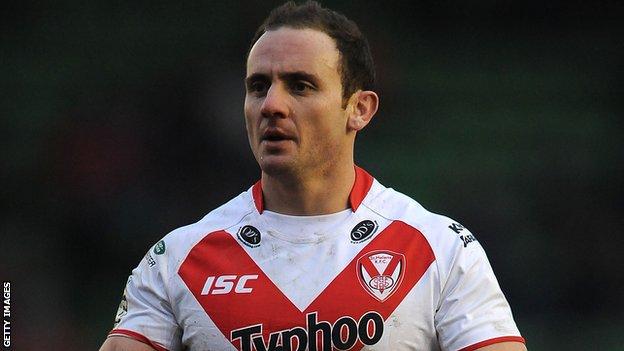 Castleford remain rooted to the foot of the Super League table after being thrashed by St Helens at Langtree Park.

Saints, whose three-match winning run ended with defeat at Wigan on Friday, ran in five tries before the break.

Having failed to register a point in the opening period, Castleford gave the score some respectability with three tries in 13 second-half minutes.

But it was a comfortable sixth win of the campaign for Saints, for whom Josh Perry and Joe Greenwood scored twice.

The tries were Perry's first for the club, and averted the danger of repeating an embarrassing incident last year.

The burly 32-year-old Australian performed an apparently traditional rugby league forfeit of having to run naked because of a scoreless season, and was arrested when his journey along the Prescot Road was witnessed by officers in a passing patrol car.

Saints were again without Lance Hohaia but their makeshift half-back pairing of Jon Wilkin and Paul Wellens marshalled the team expertly.

For Castleford, it was a sixth successive defeat and a game in which their defence was all too easily breached, with Saints having already gone close by the time Mark Flanagan crashed over for the first try after Sia Soliola had won a penalty close to the line.

Perry, on his return from injury, made no mistake from close range as he barged over for his first Saints try, while Louie McCarthy-Scarsbrook typified the dominance of the Saints pack as he took a short pass and ran through three Tigers defenders to score a third try under the posts.

Wellens put Greenwood through for his first try and took a heavy tackle from former team-mate Michael Shenton in the process, an incident which referee Robert Hicks placed on report.

Saints notched a fifth try before the interval after Wellens was stopped short and the ball was quickly reworked for Greenwood to dive over.

After the break, another Castleford error was punished as Greenwood scooped up a loose ball and sent Mark Percival clear before Tommy Makinson finished off.

Adam Swift then went over in the corner and with Percival converting for a fifth time, the game was as good as over at 38-0.

The visitors did manage something of a comeback, however, as Daryl Clark and Justin Carney broke from deep to go over in quick succession.

Perry forced his way over for another Saints try but the home side lost some of their intensity towards the end as James Clare broke through to claim another Tigers consolation.

Jamie Ellis converted all three Tigers tries but Jordan Turner made the final telling contribution with a try in the closing moments.

The only downside of the day for Saints was the loss of Perry late on with a shoulder injury.

"The older blokes - Wilko and Wello - set a good standard for commitment and effort.

"You want to start well. Starting well on Easter Monday is always good. Us controlling possession made it really tough for them.

"They have had an unhappy time of late, a couple of unfortunate losses, so to start well and put that bit of doubt in their mind was always going to be beneficial."

"I think some players are a little bit disappointed with other players' inability to stay consistent.

"I think some players are disappointed that they can show some facets that are quite appealing but then others that aren't up to scratch at times.

"If we get a bit of ball we can score some points, but you have also got to defend when you don't have the ball.

"The scary thing is that during the week it doesn't seem like a team that is on a losing run.

"Some of the spirit - everyone is getting on and working together - is really good."

Replacements: Laffranchi for Perry (24), Walmsley for Clough (33), Tilley for Flanagan (53), Greenwood for McCarthy-Scarsbrook (28).