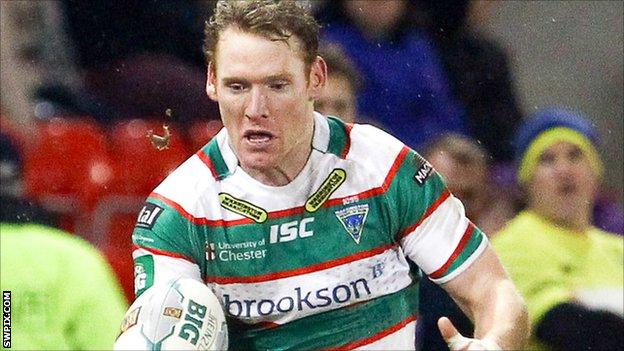 Warrington Wolves put Friday's derby defeat by Widnes Vikings behind them with a 10-try dismantling of strugglers London Broncos.

Kieran Dixon, who ran in a hat-trick, put London ahead but Wire responded through Joel Monaghan, Rhys Williams and Chris Bridge's brace.

Erjon Dollapi's late score was consolation for a well-beaten Broncos.

London were competitive early on, a measure of their improvement in recent weeks, and their in-form winger Dixon profited from Chad Randall's interception to open the scoring.

It was an even contest up until half-time. They made us work hard in that first half for everything we got.

Warrington bounced back with two quick tries, Joel Monaghan beating Liam Colbon to Richie Myler's high bomb for the first and Williams, back from dual-registration duty with Swinton finishing off a flowing move on the left.

Dixon got his second after some good work in the tackle gave him the opening, but an error from full-back Alex Hurst was punished when Bridge ran in his first, and then got a second after good work from Joel Monaghan.

London had the final say of the half through Dixon, but were again on the receiving end after half-time when Hodgson scored a fifth try for the Wolves.

Ratchford got his brace after Chris Hill and Hodgson had set the platform respectively, and when Monaghan dived in at the corner before Williams' try, London's resistance had long been broken.

Dollapi's score off the bench salvaged some pride for the visitors, but they have now lost seven of their 10 games this year.

"It was an even contest up until half-time. They made us work hard in that first half for everything we got. We had to keep going with what we had in mind to do. We were quietly confident that the plan was going to work out and it ended up being that way.

"I thought everybody stuck their hand up and there were some people who came off the bench, in particular, who were very good for us.

"Ben Currie and Michael Cooper were especially good. I thought they sparked us and gave us a real energy, and showed the way for some of the others."

"We've been talking down there about how disappointed we are with the massive momentum loss.

"Halfway through the second half it was good for us, but they [Warrington] had the experience and the knowhow, and that bit of speed at the ruck as well to create some momentum. We came up with a couple of poor defensive plays that hurt us.

"The theory is everyone gets a home game, but the second one has just traditionally not been a quality game, not because we're resting players but you just get two tired teams. I'd like to see us play a game Thursday, a game Friday, a game Saturday, a game Sunday and a game on Monday. Just spread it out over the week and let us all enjoy a good Easter with some quality games."