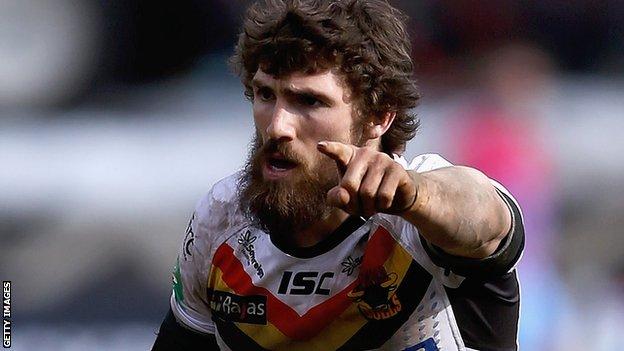 The Broncos led 20-12 at the break at Adams Park, thanks to a first-half hat-trick from in-form Kieran Dixon.

Elliott Whitehead (2), Danny Addy and Chev Walker also crossed for the Bulls, who are third in Super League behind Wigan Warriors and Huddersfield Giants.

Walker's first-half score was the 100th try of his career, while Michael Witt scored London's other try and also kicked two goals.

Kieran Dixon has scored eight tries in his last four appearances for London Broncos, including hat-tricks against Warrington and Bradford

The match was played at the home of Wycombe Wanderers and Wasps, rather than the Broncos' regular home at The Stoop, as rugby union side Harlequins are in Heineken Cup action there on Sunday and were keen to keep the pitch in good condition.

Wherever the venue, Tony Rea's side remain without a home win in 2013, although they looked like ending that run as Dixon inspired them to an eight-point lead at half time.

After Addy wriggled through two tackles to cancel out Witt's early try, 21-year-old winger Dixon continued his sparkling start to the campaign, running in a second hat-trick in the space of five days and repeating the trio of scores he registered in

Whitehead bundled in for the first of his brace to narrow the gap to four points, before Sammut crossed four times in 16 minutes to send the visitors clear.

Returning scrum-half Luke Gale then fired a long pass for Whitehead to seal victory, to send Francis Cummins's side flying up the table.

"You are only in a contest if you are part of it. When we were challenged by Bradford today, we were not up to the task and that is an attitude thing.

"We lost control of ourselves in the second half and when Bradford ran at us we could not match them physically.

"They controlled the game in the right areas and they won the battles that needed to be won."

"When Jarrod [Sammut] is on his game like he was today, there are not many players in this league that can do what he does. I would happily have paid to see him play like he did today.

"The trick for him, though, is to produce this type of performance week in and week out, and do it for 80 minutes.

"Having said that, he is a special player and we are happy to have him.

"Overall I am delighted. For us to come out of Easter with five points is a great effort on our part."