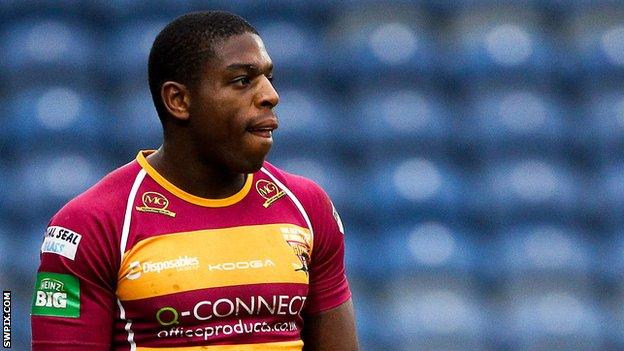 Huddersfield Giants returned to the top of Super League with a seven-try victory over bottom club Castleford.

But the Giants dominated the remainder of the game, winger Jermaine McGillvary crossing twice for Paul Anderson's men.

But the Warriors will reclaim top spot if they beat Wakefield at the DW Stadium on Sunday.

Ian Millward's Castleford, meanwhile, are now winless in nine Super League games, despite making the perfect start to the match and ending with three tries in the space of four minutes in the closing stages.

Seconds after making a try-saving tackle near his own line, influential half-back Rangi Chase created a first score of the season for back-row Holmes, who burst through a gap to cross under the posts from close range.

Castleford have now gone nine games without a win (D1, L8). Their last victory came against champions Leeds Rhinos in round two

But any hopes of repeating of were soon extinguished by a ruthless Huddersfield outfit.

Hooker Lunt's opportunist effort from dummy half, followed by a run of 80 metres from centre Wardle, saw the Giants take a 12-6 lead.

A flowing move to the left wing sent Murphy over for a third try without reply, and it got worse for the Tigers when Chase was shown a yellow card for dissent.

The visitors used the extra man to their advantage as they worked an overlap for McGillvary to sprint in unchallenged, before a break from Leroy Cudjoe allowed Robinson to extend the advantage.

After a quiet start to the second period, Huddersfield were back amongst the tries and it was no surprise that their skipper played a prominent role.

Danny Brough, who was successful with six of his seven goal attempts, kicked from half-way and McGillvary outpaced Castleford full-back Richard Owen to touch down.

Another smart kick from Brough sent Ferres over in the corner for the Giants' seventh score of the afternoon.

Castleford sparked into life following the departure of Huddersfield's Jamie Cording to the sin bin, with Milner, Clark and Walker all crossing the visitors' line with ease, but it was far too late.

"We probably made more clean breaks than we have in a lot of games but the composure was lacking and that's what happens when you are on a losing run.

"The players tried hard in the second half but it's not about trying hard. We want to turn that into being a more consistent team.

"I think Nathan Massey has dislocated his knee. It's not a good one for us. He's been a really consistent performer for us.

"And I think Jake Webster will be out for the season. We'll know more in a couple of weeks but, whether or not he has an operation, I think it will be six months.

"It leaves us very short. I've identified a player in Australia who would be good for us but we'll just have to see."

"The closing stages definitely took off some of the gloss, although I thought we were the better team throughout.

"I'd told our players that Castleford have got a history recently of scoring a flurry of points and we allowed them to do it again. We've got to be better than that but we've won.

"We could have been better but we got two points and I'm happy because it keeps us where we want to be."