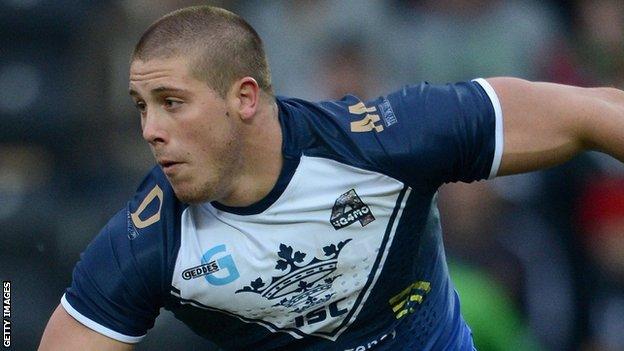 Hull FC achieved back-to-back wins for the first time this season as they blew Catalan Dragons away with a strong second-half performance.

A try by Ben Crooks for Hull, and two goals by William Barthau for Catalan, left the score level at half-time.

But a try from Tom Briscoe and two from Tom Lineham saw Hull stretch away in the second period.

Morgan Escare grabbed a consolation score for Catalan, but Crooks crossed for his second for FC late on.

Catalans posted the first points of the game after a penalty for a high shot gave Barthau the chance to give the Dragons an early lead.

It was a battle in the first half and there wasn't a lot in it. Somebody had to step up and dictate the game and I thought we did that well in the second half

Hull scored the first try when Aaron Heremaia's neat grubber kick was pounced upon by Crooks to score for a 4-2 lead.

Just before the break Barthau levelled the game with a penalty from in front of the posts.

Hull built pressure after the break and turned it into points when a spread play down the left allowed Briscoe to take a pass from Shannon McDonnell and touch down in the corner.

Heremaia's beautifully floated cut-out pass then put in Lineham, who grabbed a second in the corner to make the game safe.

Escare showed great footwork to cross for the Dragons' only try, but Crooks pounced on a loose ball with two minutes to go to grab his second.

"This type of result has been coming because we've been working hard in training. We wanted to dictate the tempo of the second half and I think we came out and did that.

"It was a battle in the first half and there wasn't a lot in it. Somebody had to step up and dictate the game and I thought we did that well in the second-half.

"We have been missing a few key players since we started the competition, but again we are not making any excuses.

"We were in the arm wrestle for 50 to 55 minutes. But at the back end of the game we had a lack of discipline and they kicked the ball better than us, and that's why the game went their way.

"I don't think the scoreboard reflects how tough the game was but credit to Hull FC, they did well to win. Hopefully Thomas Bosc, Damien Blanch and Daryl Millard will be available next week.